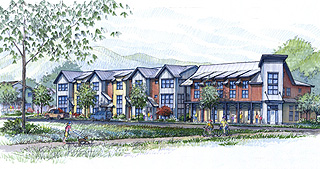 Construction has begun on Sweetwater, a new community on 22 acres near Idaho's Sun Valley. Weber + Thompson did the master plan for the complex, which will have 421 housing units.

Although high-end home construction is booming in Sun Valley, workforce housing has not kept up, and many Sun Valley workers commute up to 70 miles to find affordable housing.

Sweetwater Co. is developing the $100 million complex in nearby Hailey to offer affordable housing to Sun Valley workers as well as retirees and middle-income earners wanting to buy second homes.

There will be a mix of housing and ownership types, including fee-simple duplexes, live/work units, town homes, carriage houses and condominium flats.

“The people of Hailey do not want a cookie-cutter housing tract,” said J. Kevin Adams, a Sweetwater principal. “We wanted to develop a distinctive, affordable, pedestrian-oriented community for Sun Valley's working population.”

The project team designed Sweetwater to feel like a village, with smaller-scaled buildings surrounding about three acres of green space. Catherine Benotto of Weber + Thompson said the design “mimics the building pattern of old Hailey.”

Construction of the first phase has begun. Roth Development Group is the general contracting manager.