Are we there yet?

We've been talking about an idea called “place” for decades, spurred by thinkers like William H. White and Jane Jacobs. Now yellowing on the shelf, their writings began to refocus Americans' attention on cities as precious heritage and seats of possibility. More recently, local authors Mark Hinshaw and David Sucher wrote books that apply the concept to Seattle's streets and neighborhoods.

When it comes to making big decisions, like taking down the viaduct — or little ones, like preserving an old church or creating a pocket park — the word “place” still gets lost. This key concept is still hard to talk about in ways that are understandable and politically relevant.

But there is new effort to figure out where we are going. Last week in Seattle, about 60 people from cities around the Northwest and across the country gathered for the Great Places Symposium. The three-day event coincided with a regional meeting of the Mayor's Institute, and brought together leaders in planning, municipal government, environmental studies, architecture, real estate and public art. 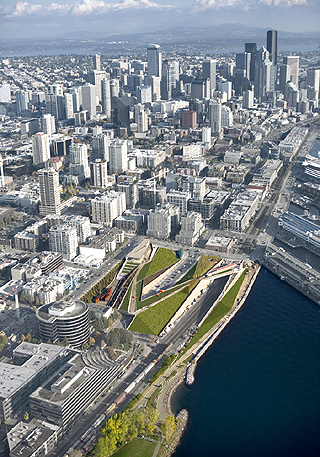 Image courtesy Seattle Art Museum [enlarge]
The Olympic Sculpture Park is proof that a great place can be created, even on a brownfield laced with street and rail crossings. It has attracted more visitors of all kinds, from tourists to joggers, than anticipated. The park’s Paccar Pavilion was the site for the kickoff gathering of the Great Places Forum last week. Organizers include Third Place Books’ Ron Sher, John Rahaim of the city of Seattle, Don Miles of Zimmer Gunsul Frasca, Kelly Mann of the Urban Land Institute, Milenko Matanovic of the Pomegranate Center, Hilda Blanco of the University of Washington and Karen True of the Great Places Forum. The park design was led by Weiss/Manfredi of New York, with Seattle’s Charles Anderson Landscape Architects on the team.

Seattle Mayor Greg Nickels, Seattle Art Museum Director Mimi Gardner-Gates and Bullitt Foundation Director Denis Hayes got top billing. Now work begins on a more inclusive Great Places conference, tentatively scheduled for the fall of 2008. The conference will probably be positioned, Cascadia-style, to include other major cities like Portland and Vancouver, B.C., and to embrace rural concerns as well as city needs.

The idea of making great places has always dovetailed with concerns about climate change, because concentrating development inside cities has always been part if the solution.

Eastside developer and Third Place Books founder Ron Sher, who hosted the forum, summed up his interest this way: “If you live in an energy-efficient house but drive 30 miles to work, you still have a massive carbon footprint.” He wants to make it easy for people to make the right choice for the environment without sacrificing their quality of life.

But what is a great place? There will never be a final answer, because every place is different in some important way. The best have a mysterious allure, and it's hard to translate the physical reality into a set of abstract ideas. It's even more difficult to take those ideas and use them to a design the next great place — one that does not replicate an existing one, Vegas-style.

At the same time, great places don't happen by accident, except in the natural world. They need planning, investment and sometimes voter approval. And as always, they need protection.

The Olympic Sculpture Park, where attendees of the Great Places forum and the Conference of Mayors convened for a dinner on Thursday night, is perhaps the best example we have. It was privately financed and is owned by a non-profit — the Seattle Art Museum — but it belongs to everyone.

It's a regional destination. But it is also free and easily accessible to hundreds of thousands who live and work nearby. It can be seen from many buildings, not just the ones that can crowd up to the waterfront.

Original estimates were that the Olympic Sculpture Park — which comfortably holds about 5,000 at a time — might see half million visitors each year. Around 23,000 came on opening day in January and 13,000 on the next day, according to park manager Leila Wilke. Counting is difficult since admission is free, but hundreds of thousands had visited even before the weather warmed up and the tourists hit in June.

Some come for the art. Some are just out for a stroll or a run, or they are walking the dog. On all but the rainiest days, they stream along the paths, promenade on the Z-shaped path, wander in the lush groves and settle occasionally on the beach. It is well maintained and programmed (thanks to an endowment from art patrons Jon and Mary Shirley), and safe (thanks to good visibility and the presence of round-the-clock staff).

Some of the greatest places in America are here in Seattle. The Pike Place Market comes instantly to mind. But there is also Pioneer Square and the International District — all here because activists recognized what we had before it was too late to save them.

Seattle Center is worthy of a chapter in any book on great places in Seattle, because of its openness, informality, cultural and educational assets, and crowds. The World's Fair legacy has been lovingly stewarded through the last half of the century, and now stands on the cusp of a new era with the possible opening up of the Memorial Stadium area.

South Lake Union is a great place of huge promise — but also lost opportunity. Remember the Commons, the dream that died in the 1990s? Funding for a sizeable park there was defeated largely because of the assurance that wealthy land owners like Paul Allen would profit — combined with bedrock mistrust of any negotiations between government and powerful private interests. As a result, Allen and his development company, Vulcan, acquired much of the land and gained a great deal more power in shaping the emerging neighborhood.

What will be the next big contender? There's the Civic Plaza, destined to fill the former Public Safety Building block adjacent to the new City Hall. It's on the boards at GGLO in Seattle, which is partnered with Foster + Partners and Arup for a design that is assertively sustainable. The developer is Triad. The multi-layer, mixed-use plan, with plentiful open space, will complete the three-block civic center that includes the Justice Center.

And then there's the “North Lot” near Qwest Field, where a new urban village developed by Nitze-Stagen and Opus, and designed by a team that includes NBBJ, Weber + Thompson and Zimmer Gunsul Frasca, is expected to emerge. It will add hundreds of market-rate and affordable housing units to Pioneer Square that are likely to be oriented toward enhanced streets, historic landmarks and public transit.

If the latter two examples succeed as great places, it will be because of great design — but also years of public planning and preparation. Those years ended with careful stipulation of the public amenities before the parcels were conveyed to private owners for final design and development.

But the biggest opportunity of all — and potentially the greatest place — lies along the urban waterfront. American cities from coast to coast have seized on the chance to remove Fifties-era aerial highways that cut off their waterfronts, all without knowing quite how they would fare.

It's safe to say that those cities would never give back the resulting open space and renewed connections. But Seattle is still in suspense, caught between the automobile age and a more sustainable future.

If the Great Places Forum — and the upcoming conference — make a difference, it may be because the participants were able to come up with some ways to “sell” great places to an electorate that thinks they happen naturally.

This will be a challenge, because the places we love are not just about weekend getaways or even huge crowds. They are really about daily life. That means a nice view from the kitchen window or a pleasant and interesting stroll — with safety, convenience and a number of options for chance meetings or even life-changing experiences.

It's easy to picture this in an affluent enclave. But the ability to easily wheel a toddler to a park or buy vegetables from a stand or just get coffee — all without getting in a car — should not be just for the rich and privileged.

B.J. Brooks, Seattle Parks acting board superintendent, was one of the participants at the Great Places Forum. How do we make having access to great places a basic need, she asked, like water or electricity?

When we do that, we will have arrived.