Having fun can be serious business for local AE firms 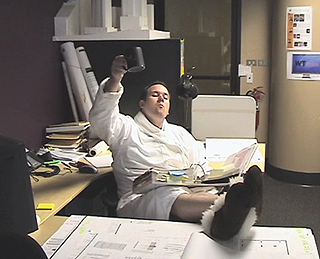 Photo courtesy Weber + Thompson [enlarge]
Weber + Thompson Senior Associate Brian Steinburg spoofs his company’s relaxed atmosphere in a video he made with Brian Geller for a company-wide competition. Their video won and the two split a $1,000 prize.

From a skateboard luge in the lunchroom to five days soaking up Scandinavian design in Finland, Seattle A&E firms seek out unorthodox ways to emphasize their uniqueness and keep their employees happy.

Firms are competing for employees in a very busy market. The Architecture Billings Index, which measures construction activity nationwide, is at a near-record level. The index, tracked by the American Institute of Architects, reports high construction activity across the West. Explosive growth outpaces talent growth in Seattle, some local firms say.

Everyone is offering good benefits and pay in the Seattle A&E industry, said Claire Baker, human resources manager at the Seattle engineering firm Coughlin Porter Lundeen, so companies have to be creative in offering additional rewards. Silliness and fun drive the strategy, say Baker and CPL's Marketing Director Jan Flesher.

That means closing the office early for themed quarterly parties, renting a local movie theater to screen “Pirates of the Caribbean: At World's End” just three days after its release and bringing Santa Claus to the office so employees' families can get holiday photos taken without waiting in line. Other events include: Oktoberfest — with a yodelling contest — at a local bar, weekly donut Fridays, company hockey nights and softball tournaments.

“They all have very rich outside-of-the-office lives and hobbies,” Flesher said. “You need to have a very rich culture to engage them.”

For the architectural and urban planning firm Mithun, focusing on education has helped attract employees and develop the staff, said Bruce Williams, a principal at the Seattle-based company.

Every year, a third of the company's employees at the associate level and higher get to research and plan a week-long trip abroad to check out new design and architectural trends across the globe. Employees share their discoveries with the rest of the company in brown-bag presentations. Applicants to the firm are often drawn by the trips, Williams said, but the real drive is to foster a creative and collaborative atmosphere.

“This is not something that we're doing to boost our recruitment, it's another definition of our culture,” Williams said. “We sell ourselves as, basically, this is who we are.”

Mithun also has “wacky Olympics” to correspond with summer and winter games, lunch-hour lectures featuring experts in a field and a beach volleyball team. Last week, the company hosted a “parade of babies” for infants recently born to company families.

Employees need to take an active role in defining company culture, said Liz Holland, a principal directing operations and marketing at Weber + Thompson. At the suggestion of employees, the Seattle-based company sponsors a soccer team and water coloring classes. For the last nine years, it has also held an annual croquet party in Principal Kristen Scott's garden in North Seattle.

“We've had a number of openings all year long,” Holland said. “We're not just wanting to find bodies, we're looking to find people who fit the culture.”

Making employees feel appreciated is key to success in the design world, said Bill Strong, a principal at Mahlum Architects, which has offices in Seattle and Portland. Mahlum has a monthly employee recognition program that lets co-workers and superiors nominate someone for stellar performance. Prizes range from a $1,000 bonus to extra paid vacation, Strong said. Between five and 12 employees get an “ERP” each month.

Mahlum also has a weekly staff meeting where projects and teams are discussed by the entire staff and a Friday Happy Hour organized by different employees every week.

These events build culture, Strong said, but are also key to survival during a fast-paced workweek.

Increasing employee investment in a company also goes a long way, said Jon Pettit, managing principal at DLR Group, which has 14 offices nationwide. Pettit said DLR's greatest asset is that all employees are part owners in the firm and are given information on key decisions.

“With the job market tight and people recruiting and the like, I think our greatest asset is that connection to the firm,” Pettit said. “One of the things that I've realized is that people stay because they feel involved and connected.”

Here is the winning entry for the Weber + Thompson video contest, "A Day in the Life."