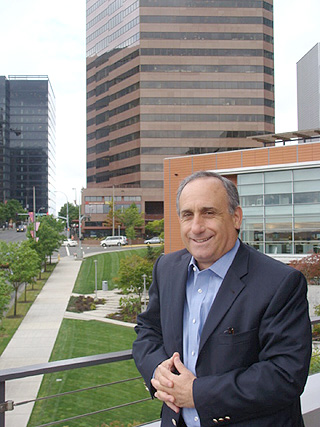 Photo courtesy of Grant Degginger [enlarge]
Grant Degginger said the Bellevue City Hall is one of his favorite projects in the city because it let the city consolidate government services and send a message on adaptive reuse.

Grant Degginger is mayor of Bellevue and chair of the Construction Litigation Practice Group at Lane Powell. He served on the city council from 1999 to 2005, including one term as deputy mayor. Prior to his election to the city council, he served for more than six years on the Bellevue Planning Commission and sits on the Seattle Architectural Foundation's board of trustees. He and his wife, Kathy, have two sons and have lived in Bellevue for 26 years.