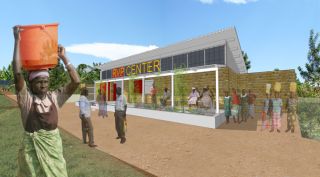 Rendering courtesy of Owen Richards Architects [enlarge]
Architects Without Borders-Seattle provided design and con- struction documents for the center on a pro-bono basis.

A team of Seattle architects, engineers, landscape architects and their partners in Africa are bridging geographic and cultural divides to build a community resource center in the Kenyan village of Chulaimbo.

More than two years of work have gone into the project for a group called the Rabuor Village Project, a not-for-profit group based in Seattle.

The two-building complex that will house the center was designed by the Seattle chapter of Architects Without Borders. Engineers Without Borders also worked on the 2,100-square-foot facility. It will house classrooms, retail, a business center, kitchen and cafe. Construction is set to begin next month.

Tom Mulica, a lead on the community resource center, said, “It's such a great organization that has their act together and knows what they're doing in terms of sustainable, grass roots organizational work.”

Seattle resident Loyce Mbewa-Ong'udi started the organization six years ago as a women's cooperative to help children in her home village, Rabuor, who have been orphaned by the AIDS pandemic. Today, the organization is working in rural areas of Nyanza province in western Kenya, where up to 35 percent of adults are infected with the virus that causes AIDS.

The group takes a comprehensive approach to battling the scourge, providing economic development assistance along with programs on education, nutrition, health and clean water. These services are “what this new center is trying to crystallize,” Mulica said.

Several months later, Mulica and his Owen Richards Architects colleague Kate Cudney, co-lead on the community resource center, were in Kenya to help find a site for the resource center. The original location was in the mountains. Working with community leaders, Mulica and Cudney found a different site on an international highway that connects to the Port of Mombasa. The location will boost the center's economic development programs.

The Rabuor Village Project is working on programming the building so it will function as intended, Mulica said.

Students will be able to develop a range of skills, from using computers to culinary arts. A student learning metal work, for instance, will be able to use the shop for a small fee to produce goods that can be taken to market or sold directly at the center's retail space.

The center also will serve as a distribution, marketing and sales hub for products made in the village. These include sunflower oil, goat milk, chickens, eggs and bricks.

Also on the team are Engineers Without Borders members Ondrej Sklenar and Alexander White, both of Belt Collins, and structural engineer Michael Chamberlain.

The team sent the drawings to Kenya with Mbewa-Ong'udi, who returned with the permits three months later.

“It was amazing she got it through all the hurdles that were necessary,” Mulica said. “Basically, all we have to do is start building.”

To accommodate the diverse program with limited resources, the team designed a series of multi-use spaces that can evolve to meet changing needs. Covered walkways and a shaded courtyard will provide outdoor gathering and educational spaces. The design allows for expansion, with a sequence of interwoven structures and courtyards.

Local construction methods and materials will be used, assuring that local crafts people can work on the facility.

The center will harvest rainwater and be oriented to maximize shading. Photovoltaic solar panels will be the center's primary power source.