As we try to change our course of development and find examples of more sustainable ways, Europe is an obvious place to look.

Take Orvieto. It’s on the edges of Umbria, Italy’s heartland, a landlocked region famous for its hill towns and traditional farms. The city of 21,000 is a base for Italy’s “slow food” movement, which promotes the pleasures and environmental benefits of eating food produced, prepared and consumed by people who know each other.

But Orvieto welcomes strangers, too, and they come from all over the world to get a taste of the streets, art treasures and architecture. Depending on the time of year, tourists mix with locals in a constant flow past shop doors, private courtyards and landmarks, including the famous duomo, or cathedral. 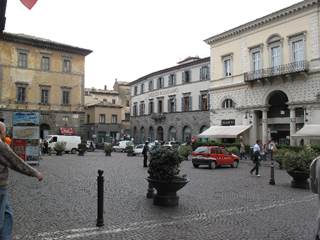 Photos by Clair Enlow [enlarge]
Even with visitor parking outside the city center, residents vie for spots in the squares and narrow streets. Parking is restricted because traffic vibrations threaten to collapse caverns that Estrucans first inhabited.

Like a lot of European cities, Orvieto is sprawling at the edges. But in its center it has managed to preserve the human scale and medieval streetscapes that people treasure. In return, they fuel the economy and drive the prices of real estate steadily upward.

Cars are smaller than in the U.S., and drivers expect to get around much more slowly inside cities. Pedestrians were there first, and they act as if they own the place.

Even before the awareness of greenhouse gases and global warming, planners and city officials saw cars and traffic as a threat to pedestrian comfort and their tourist economy.

But in Orvieto there’s another threat: collapse of the hilltop itself. As it turns out, traffic vibration has accelerated the caving of ancient underground rooms, a network of private cellars and public caverns that date from Etruscan, pre-Roman, times. This city-under-the—city is dug into the soft volcanic rock of the hill.

So controlling and minimizing traffic is not just a matter of making the place charming. In a very real way, it’s a matter of saving the city.

Italy has a legal framework for restricting traffic in designated zones and providing funding to make it work. That typically means balancing restrictions with amenities and services with projects that make it easier to leave the car behind. 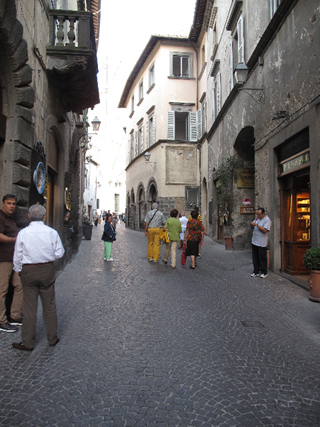 [enlarge]
Traffic is restricted on Orvieto’s streets. Shopkeepers resisted, but business has not suffered as a result, according to one resident.

In Orvieto, traffic on most streets is now legally closed to all but residents, who park in their customary places. Vehicles of all visitors and some weekday workers are restricted to one general circulation route.

But the city also offers generous parking elsewhere and lifts onto the historic hilltop.

Orvieto has long been served by trains running between Florence and Rome, and also by a 19th century funicular. The mountain railway provided a quick trip from the station to the city above, but by the 1970s it had become a curiosity and fallen into disrepair.

Visionaries in that decade and the next started a movement to bring back the funicular. In 1990, it was rebuilt on the original plan, with a modern electronic drive system. Two cars move up and down at 15-minute intervals, with a capacity of 75 people each. It’s now a source of income for the city.

But the hundreds of daily tourists arriving in cars could not be ignored. And every trip with a destination inside the historic city needs a parking place. Parking is available near the funicular, but there is another option on the opposite end of the historic plateau. Near the same time the funicular was rebuilt, an 800-stall garage was also constructed. It hugs the cliff below the city and is easily accessed on the major route around it.

A new master plan in the early 1990s confirmed the benefits of these investments, as well as the restrictions on traffic in the historic center. In 1998, construction was completed on a series of user-friendly conveyer-assisted tunnel passages from the hillside garage to the hilltop town, making it easy and fun to leave the car behind.

These bold and thoughtful solutions to traffic and parking show what is possible when the need is clear and the public agrees. But they also show the limitations of trying to accommodate cars in new ways, without making other changes.

Two major piazzas are full of parked cars on weekdays in Orvieto, and workers are very proprietary about their spots. The garage under the hillside appears to be less than half filled during the daytime. Lack of signage from the nearest auto route seems to be at least partially responsible.

At the same time, construction has begun on a second very large garage, this one with even more stalls. It is mostly below grade, and will have sports fields on top.

This will provide more parking for residents and workers, but will not help to keep cars out of the city because, unlike the hillside garage, this one must be entered from atop the plateau. 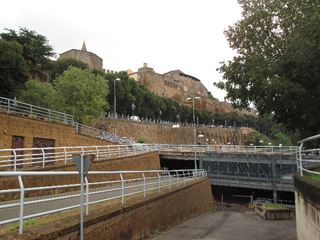 [enlarge]
Visitors can park their cars in this garage and get to the hilltop city of Orvieto through a series of underground passages and conveyors. It complements a funicular, or hill tram, that takes visitors from a train station to the city.

Though it is near completion, construction on the new garage seems to be suspended, at least temporarily. The international economic crisis, along with a new city administration and shifting party alliances, have been blamed, although city officials deny that there is any significant delay.

It seems that the supply of parking stalls has overstepped demand in Orvieto.

It turns out that saving the precious pedestrian environment — along with everything else from the Etruscan caves to the larger global atmosphere and climate — depends first upon the ability of people to change, and make different choices about how they travel, where they live and how far they are willing to walk.

Clair Enlow is in Italy studying development as a fellow with the Northwest Institute for Architecture and Urban Studies, and as a visiting scholar at the American Academy in Rome.