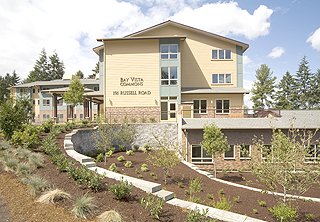 Projects built for the Bremerton and King County housing authorities are two of 18 winners of the national Award of Excellence.

The National Association of Housing and Redevelopment Officials, or NAHRO, selected the winners from a pool of 212 merit winners and 84 Award of Excellence nominations.

Bremerton Housing Authority began construction of Bay Vista in 2006. Construction was completed in 2007. The authority can accept up to 66 Medicaid-eligible residents in the project. The other six of the 72 apartments are market-rate, private-pay. Twelve units are reserved for people with dementia.

CE&C of Tacoma was general contractor on the project, which cost $8.3 million to build. Other team members were AHBL, civil and structural engineering; Hargis Engineers, electrical and mechanical; and Lauchlin R. Bethune Associates, landscape architecture. 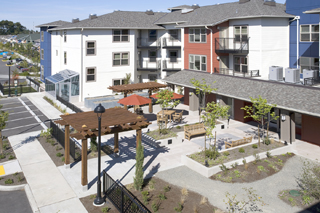 Rick Keating for King County Housing Authority [enlarge]
The Nia in White Center has a terrace, P-patches and other common areas.

The Nia is part of King County's $235 million, Greenbridge Hope VI complex, and was designed for the White Center area's older, diverse community. It is King County Housing Authority's first new public housing complex for seniors and persons with disabilities in 26 years. It opened in September of 2008 and leased up in four days.

The three-building complex has 82 units: 64 for seniors, and 17 for younger disabled people. Tenants' average annual income is $10,200.