Design Perspectives: Can a city be carbon-neutral? Seattle wants to find out 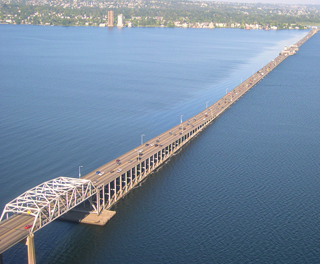 Photo courtesy of the Washington State Department of Transportation [enlarge]
Design for expansion of the state Route 520 bridge is being re-examined to see if it can accommodate light rail. Transportation accounts for half the greenhouse gas emissions in the region, and the Seattle City Council has recently listed carbon neutrality as a goal.

If you go to the Seattle City Council home page, you'll find a new heading on the list of this year's priorities: carbon neutrality.

It's succinct and precise, an unusual combination in environmental science, politics and law. It's also very ambitious.

Global warming and climate change is otherwise known as the “greenhouse effect,” and carbon is the most important greenhouse gas. Carbon emissions are closely related to fossil fuel consumption.

So, what does it mean to be a carbon neutral city? Just how much carbon emission is Seattle responsible for? More precisely, what is its carbon footprint, and how can that be reduced to a net of zero?

The City Council will begin to answer these questions this year. “Carbon neutrality” is not a sound bite.

“This is going to be deliberate,” said Seattle City Council president Richard Conlin. “Not cosmetic.”

The heading went up on the home page after Conlin and first-year councilmember Mike O'Brien had “chewed on it” for weeks, according to O'Brien. The conversation included a number of nonprofits and advocacy groups, from Climate Solutions to the Seattle Chapter of the American Institute of Architects.

Can a city really be carbon-neutral? According to K.C. Golden, policy director of the environmental think tank Climate Solutions, “It's not pie in the sky, but we don't have a blueprint either.”

“Even with the technologies we know today, we can get into the ballpark.” 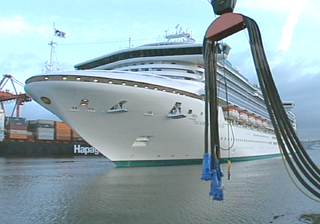 Photo courtesy of Seattle City Light [enlarge]
As Seattle City Light trimmed the last metric tons from its carbon footprint, it got cruise ships to turn off generators and plug in to the grid. Cleaner air on the waterfront is one of the side benefits.

One difficulty in making these calculations lies in drawing the boundary. Cities don't live in a bubble. We can calculate how much fossil fuel we burn, but what about that aluminum can consumed in Seattle but made in Wenatchee? Which city's balance sheet gets the emissions?

Governments are supposed to take care of long-term problems that individuals and businesses can't or won't address, according to O'Brien. Federal and state governments are notoriously slow in setting and enforcing environmental standards. But former Seattle Mayor Greg Nickels took the lead back in 2005, signing up other cities to abide by the Kyoto protocols for emissions reductions, after the federal government refused to sign up.

And that's how long the city has actually been calculating its greenhouse gas emissions — not just for city infrastructure, but for the entire population. The figures come from data collected through utilities and traffic monitors.

In 2008, the city met the Kyoto goals of a 7 percent reduction over 1990 levels — counting residents' air travel — even while the population increased by 16 percent over the same period.

It's a long way from 7 percent to 100 percent reduction. So far Mayor Mike McGinn has not come out explicitly in support of the goal. But according to Jill Simmons, who was active on staff during the Nickels years and is now acting director of the city's Office of Sustainability and Environment, the McGinn administration has adopted a five-part strategy for sustainability focusing on transportation, but hitting sources of greenhouse gasses on all fronts.

She summarized the strategy as: “Walk, bike or ride instead of driving alone.”

And the goal in the city's current comprehensive plan does not differ a great deal from carbon neutrality, she said: an 80 percent reduction in greenhouse gasses over 1990 levels, by 2050. In addition to cleaner power, Simmons credits much of the progress toward that goal to energy efficiency in buildings, something Seattle is becoming known for.

Admittedly, Seattle is unusual in that its power is about 90 percent hydroelectric. The source is carbon neutral, but finite. It's susceptible to global warming and increased greenhouse gases from year to year. Shrinking glaciers and lower snowpacks will increasingly impact local electrical power supplies.

Aggressive education and conservation measures, especially with heavy industry, accounted for most of Seattle City Light's emissions reductions. The utility divested itself from its shares in a coal-fired power plant in Centralia, and invested in wind power along the Washington-Oregon border and other alternative sources to lose most of the rest of the metric tons of carbon in its inventory.

But there were some stubborn tons remaining. And that's where it gets interesting — and rewarding. Seattle City Light had to partner with business — from cruise ships to dairy farms — to offset that.

Now cruise ships in Seattle plug into the electrical power grid, running on clean electric power instead of running their generators, emitting greenhouse gasses and, coincidentally, polluting the air along the waterfront.

Other ports all along the coast have followed suit, according to Best, and the Seattle engineering firm that worked with Seattle City Light to help the cruise ships make the switch, Cochran Electric, has became a recognized national expert, now exporting the service.

With offset credit from Seattle City Light, a dairy farm in Eastern Washington is now gearing up to capture methane gas for power generation from the manure it produces, a triple benefit that helps mitigate a local air and water quality impact.

But by far, the biggest emissions category for Seattle is transportation. The Puget Sound Regional Council has determined that in our region, transportation (including air travel) is responsible for 50 percent of greenhouse gas emissions.

Seattle City Light has done studies on supplying electric power for vehicles, and seems determined to be part of an eventual transition to all-electric. But needless to say, any demand from electric vehicles — even during off-peak hours and from yet-to-be-developed alternative sources — must compete with traditional demands for power, putting additional burdens on an agency that is already stretched to be carbon neutral.

That means that reducing vehicle use is the key to lower carbon emissions. Investment in mass transit, coupled with land use decisions, is a big part of the answer. New highway lanes will just carry emissions problems forward to the next generation.

Think of it. With carbon neutrality as a goal, the cost of carbon emissions counts against the benefits of any decision in which the city holds sway.

Should we rebuild the state Route 520 bridge, a 50-year investment in one of only two crossings over Lake Washington, without linking it to the expanding light rail system? Unthinkable. Mayor McGinn and the Seattle City Council, led by Conlin, recently forced the issue, taking the project back to the drawing board.

Working out the details of the council's commitment to carbon neutrality will be a very wonky business. In addition to reducing vehicle miles traveled, the road to success is through local conservation and clean energy generation and lots of smaller steps like tree planting and carbon sequestration.

But carbon neutrality is not just about local costs versus global benefits. It's a banner, and a boon to economic development. This is not your father's boosterism. It's smart civic promotion for the 21st century.

It's also great economic development, as the example of Seattle City Light shows. Under a citywide mandate for carbon neutrality, the agency's experience with offsets might extend to industry. If a Seattle company can show that its products result in a net decrease in carbon emissions, the city could take partial credit for each widget sold, and apply it against the city's total carbon footprint.

For services, the city could take some credit for emissions-reducing projects outside its boundaries, projects that Seattle-based consultants or firms are involved in designing or building. If this seems too difficult to quantify, remember that a rapidly increasing number of architects, landscape architects and engineers in Seattle are trained in calculating energy savings over industry standards, all certified by a third party.

With the goal of carbon neutrality, the city of Seattle will become an even better client for sustainable services and practices. The benefit to the world is in the example — the export of best practices, if you will.

And if Seattle can, why can't the next city?