Project of the Month: Urban Waters: habitat for humans and animals 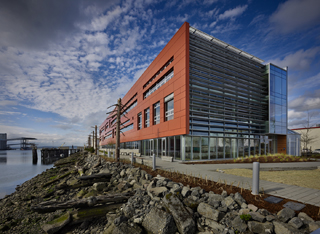 Photos by Benjamin Benschneider [enlarge]
The Center for Urban Waters is an iconic presence on a narrow strip of land along the Thea Foss Waterway. Natural snags set on metal posts appear sculptural and provide critical wildlife habitat.

Rabbits are in the grass, and pigeons are in the strawberries on the roof of the new Center for Urban Waters in Tacoma, according to Jim Parvey, who works at the center as a senior engineer for the city of Tacoma.

But the real news is that the ospreys are back, on top of the food chain. Parvey knows because he's seen the rabbit and pigeon parts the ospreys leave.

“It's a natural ecosphere,” he said.

It's a small miracle. On the banks of the Thea Foss Waterway, across from downtown Tacoma, the circle of life is widening at the Center for Urban Waters. Seabirds are returning. Otters and baby seals are making star turns.

The water in this longtime industrial center was once among the most heavily polluted in the nation. It is part of a larger Superfund site that emerged in 2006 after a 20-year cleanup that cost more than $100 million.

“We don't ever want to go through that again,” said Parvey, who managed the Center for Urban Waters project for the city of Tacoma. 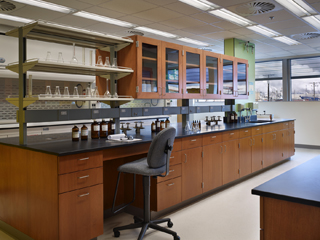 [enlarge]
Lab spaces are along the upland side of the complex. Samples from surrounding waters are constantly tested for pollutants.

Tacoma has a lot of experience to share with the rest of the world. Bay cities typically have a history of ships' ballast, industrial pollution, street runoff and spills of all kinds. While monitoring Tacoma's urban waters, scientists and technicians at the Center for Urban Waters are working on methods for cleanup and control of pollution sources.

“There is a lot of synergy having these people in the same building,” said Parvey.

The project began in 2002, when the city, the Port of Tacoma, the University of Washington Tacoma and local business leaders met to outline a vision for joining forces. They agreed to combine a new research facility with labs and offices for Tacoma's Environmental Services unit, which was working out of an industrial basement.

The Center for Urban Waters would have to set a high standard for energy conservation as well as water use and reuse. From the beginning, the most important value was environmental stewardship.

The city and the Center for Urban Waters were able to meet their goals even with a tight budget by working with the National Development Council. The NDC hired a private developer, and holds tax-exempt, low interest debt until the city pays it off over time. The city was able to honor public goals while gaining the efficiencies and teamwork of time-sensitive private development. This is a way of marrying a private project delivery process with the lower public cost-of-money, according to NDC senior director John Finke.

The site search faced a near-impossible combination of priorities. The center had to be near downtown and on the water. The new nonprofit settled for near downtown and across the water: on the Thea Foss peninsula, a longtime center for heavy industry.

“This was an environmental mess,” said Parvey.

The contaminated site is squeezed between a trucking corridor, a refinery and the bay, and is trimmed even further by public right-of-way requirements for a shoreline promenade, one that ends abruptly with the property line of the neighboring refinery.

The Center for Urban Waters is now a visible icon for Tacoma.

The design is a marriage of office building and laboratory on an extremely narrow strip of land, according to Dan Seng, project manager for Perkins+Will.

The two uses are lined up side by side, with the more enclosed laboratories along the east side and the industrial sample intake areas in the base, facing the older industrial development on the peninsula. Open plan offices line the western side, with water and city views, plenty of light and clean air.

The linear shape is turned into an advantage. High and low windows bring air through the office space without depending on cross-floor circulation. The biggest comfort issue is potential heat gain. Shading is achieved with an automated exterior venetian blind system. Light shelves deflect summer heat and bounce sunshine into the center of the building, lending their own lemon tint to the reflected light on the ceiling.

With its strips of window openings, the thickness of the long western wall is emphasized at both ends. The more elaborate screening on the south end gives the entry side visual dimension and shading.

From the two upper levels and the roof, Mount Rainier rises above the neighboring industrial buildings.

Along with the tight budget, the squeeze on both sides of the site made for focus in the design.

“We were forced all the time to decide what really were the most important things in the building,” said Finke.

Research drove a lot of the material selection, according to Seng. In the metals lab, there are no metals. In the volatiles testing room, there are no plastics.

Safety rules require laboratories to have a very high rate of air change. In spite of this, the building is over 30 percent more energy efficient than standard code-compliant buildings. Strategies include geothermal wells under the parking and hardscape, massive heat exchangers on the roof that retain heat while exhausting air, and radiant heating inside. 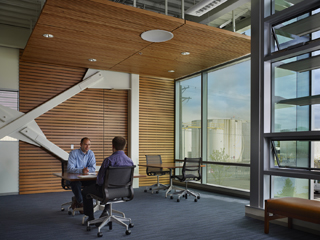 [enlarge]
Re-milled timbers salvaged from the Tacoma Municipal Dock create sleek screens in the lobby and conference rooms, as well as the lobby ceiling and reception desk. Post-consumer materials are emphasized throughout the structure.

Water collected from the green roof and the laboratory's pure water system is collected in two prominent 36,000-gallon tanks on the upland side. It is used to flush toilets and irrigate the flourishing landscape.

Re-milled timbers salvaged from the Tacoma Municipal Dock are mounted in sleek screens in the lobby and conference rooms, as well as the lobby ceiling and reception desk. Post-consumer materials are emphasized throughout the structure.

After a favorable first summer, the rooftop landscape is lush. On the ground, paving is permeable.

Recycled granite curbs from the city serve as seating along the urban promenade that runs between the building and the tidal shore. The promenade, intended to someday follow more of the waterline, now stops abruptly at the neighboring refinery.

The landscape is by Swift Co. of Seattle.

“The place is tough,” said landscape architect Barbara Swift, who specializes in restored forest ecosystems, complete with woody debris. “We weren't trying to suburbanize it or make it sweet.” 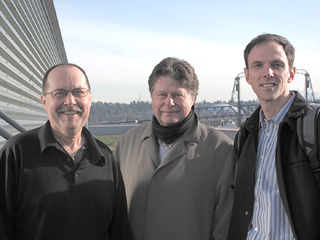 Large Douglas fir and cedar snags (dead and decaying trees) are mounted on cast-in-place metal posts and ranked along the rocky shore beside the long building. The result is that the natural snags appear sculptural. They will break down slowly over the next 20 to 50 years. Then new snags can be mounted on the metal posts.

The ospreys only know that the snags are exactly what they need — to hunt, hang out and delight the human users of the Center for Urban Waters.

“…a functionalist essay expressive of the logics of water treatment combined with a singular distinctive facade as its key marker in a relatively nondescript context.”

The Project of the Month is sponsored by the Daily Journal of Commerce and the Seattle chapter of the American Institute of Architects. The Project of the Month for March was selected with the assistance of University of Washington professor Vikramaditya Prakash, landscape architect Barbara Swift, architect Scot Carr and architect Jim Graham. For information about submitting projects, contact Isla McKetta at AIA Seattle at (206) 448-4938, or imcketta@aiaseattle.org.