Design Perspectives: Cars and pedestrians: Can't we all just get along?

What a difference a street makes.

A safe, interesting and pleasant street — where you can actually get somewhere without climbing behind the wheel — can mean a lot. The ability to relax and enjoy walking and meeting people outside your door can be the difference between freedom and captivity, connection and isolation. Regardless of your circumstances, a high quality public right-of-way can make you feel rich instead of poor. 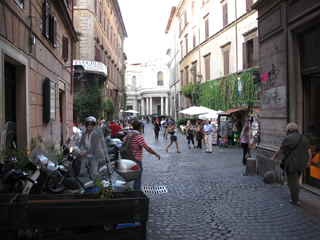 Photo by Clair Enlow [enlarge]
Access to an inviting, walkable public environment seems to be taken for granted on this street in Rome. Parking and swift trips by car? Not so much. “Living Streets” is a new book about public rights of way, and it should help America’s cities find a more equitable balance between cars and pedestrians.

In this sense, people haven't changed much since ancient times. In the history of cities and civilizations, “street” and “place” are almost synonymous. Resident or visitor, the character of the street you're on says you are somewhere — or not.

This is a timeless principle, but never truer than it is right now. Take Rome, for instance. For centuries, people have expected to see beauty in the streets, along with places to stroll, sit, and even wash hands and drink clean water. Romans consider these things a fundamental right — and they still have them.

But one day early in the 20th century, Italians fell under the spell of the automobile. Cars — and their noise and exhaust — began to fill the streets of the Eternal City. Now cars compete with people there for space in many — but not all — streets. And you may not like being in traffic there, but you can be sure that no one is willing to give up the city.

Unlike Rome, much of the space in and around American cities — from Seattle to Phoenix — was designed and built under the spell of the automobile, where the “right” to get anywhere as fast and easy as possible in a car has trumped rights for pedestrians and users of other modes of transportation. As a result, in many suburban environments it's possible to drive from garage to signalized roadway to parking lot and back without experiencing much of anything like a street. The rare pedestrian along the way is pitiable or suspicious. 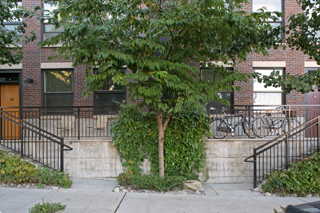 We can do much, much better. And now, in cities all around the U.S., the spell is lifting. But policy makers and public officials are still hampered in their efforts to do the right thing, and find the best mix for lively and useful streets.

Architects design to the property line, and don't go on to discover opportunities outside it and in the public realm, according to Lesley Bain, urban designer and principal with Weinstein A|U. “There's so much we could be doing, and we are not. We're still getting the hang of this stuff,” she said.

“Living Streets” is a new book by Bain and two other Seattle authors. Published by John Wiley & Sons, it should help anyone find the right place to start — on almost any city street.

Co-author Barbara Gray, an urban designer and transportation planner with the Seattle Department of Transportation, said the book is about how to get good projects done.

“We try to accomplish so much,” she said. “(But) from where I sit professionally, the people that are very concerned about (traffic) capacity come out after design is well under way.”

When Gray began collaborating on the book, she was frustrated because there is little understanding of the claims for other functions or competing uses on streets. The book is a tool for negotiation — and transformation.

In competing for the right-of-way, vehicles have an unfair advantage because in the standards and formulas for traffic capacity and service the only thing that counts is speed. Fewer cars means faster movement: a higher “level of service.”

What really counts for pedestrians is almost the direct opposite. More of them on a street makes it safer and more attractive. To be really alive, streets favor complexity over simplicity. Combining uses wins over strict separation. Above all, qualitative features must be emphasized as much as quantitative formulas.

Late 20th century development in American cities effectively shunned people on foot or bikes in the public right-of-way. But banishing cars — and creating pedestrian malls — is rarely the solution. It was widely tried in the 1960s and 70s, as the book recounts. Some of these decisions were reversed, because without traffic right outside their doors, small retail businesses withered. There just weren't enough pedestrians living in the vicinity to populate the streets.

Paving the way for lots of pedestrians works better in cities that have learned how to do mixed-use zoning and are well on their way to the “18-hour community,” Bain cautions.

Bain said there will never be a perfect mathematical equation or a “one-size-fits all” approach for any right-of-way, and “Living Streets” does not provide one. For instance, how to include parking in the mix of uses is discussed, but you can't use the book to determine exactly how much or where it should be. Every street is part of a larger network, one in which the distribution of uses, and the character, evolves over time in response to laws, standards, design and investment.

• mobility, which includes bicycling and walking as well as motor vehicles

• place making, everything from art work to the perception of safety that makes streets attractive and memorable

The first step to good streets is recognizing there are many more claims on rights-of-way than there is space. “Everybody has to compromise to get the best solution,” said Gray.

Some cities are just getting bike lanes. But in Seattle, “We've been chipping away at this for decades. Some steps are visible, and some not so visible,” she said.

Steps are visible on Terry Avenue in South Lake Union. Bain and Gray worked together on the Terry Avenue North Green Street in 2003, one of the case studies in their book. That project formalized design guidelines for sidewalk width, plantings and water features, curbs, special paving and lighting without making it all a requirement.

Amazon.com's headquarters now fronts on it, and many of the features have been installed, making the street the heart of a lively neighborhood.

“We established a vision we could add to over time,” said Gray. “When the next development came in or we had the funding, we knew what to do.” 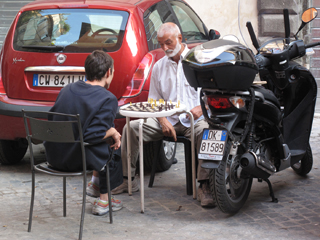 Photo by Clair Enlow [enlarge]
Squeezing a chess game between parked vehicles is one way to use this Roman street.

Streets, by nature, are part of the public realm and subject to public control, but the role of the private sector is huge — and growing.

Take Ballard, for example. The elements of the Ballard Street Master Plan were decided over a decade ago, but they have fueled a thriving neighborhood. “When (the master plan) was completed, there really was no project,” according to Gray. Then the library came, followed by Ballard Commons Park. Now QFC, a private owner, has implemented the guidelines.

In Pioneer Square, Todd Vogel of the International Sustainability Institute bought two floors of the Nord Building near Occidental Park in 2007. He and his tenants began opening windows to the back, sponsoring alley parties and art projects, and employing local homeless people to help clean up. They won small but important concessions from the city, banishing Dumpsters and getting frequent trash pickup. Nord Alley is now literally on the (Google) map.

These kinds of plans work best where there are community champions like Vogel and lots of activities coming together, as in South Lake Union. But when it comes to making great streets, you have to start with what you have. That's what “Living Streets” is all about.