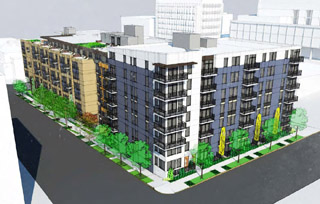 A Seattle design review panel will give its recommendations on a 282-unit apartment building at 400 Boren Ave. N. in South Lake Union proposed by the developer Greystar.

The seven-story building would sit on a half-block site bounded by Boren, Republican and Harrison streets, and an alley to the east. A pair of buildings would be demolished.

Plans call for an E-shaped building with two alley-facing courtyards and a main entrance off Boren. Two levels of parking would be underground.

Apartments would be a mix of studios, open one-bedroom, and one- and two-bedroom units. Some would be built at street level, with stoops and gated entries to create a buffer from the street.

No commercial component is planned.

Amenities include two rooftop decks and gardens with seating, a hearth and barbecue station.

The building would have brick and concrete at the base. Other exterior materials include metal panels and wood veneer.

The building would have a slightly stepped appearance along Boren, which has a 30-foot drop in grade as it runs from south to north. Each end of the building would be visually distinct, with the north end more articulated than the south.

Charleston, S.C.-based Greystar manages more than 190,000 apartment units nationwide. The company says it has more than $500 million in development.

The DJC first reported plans for the South Lake Union project in March.

The site is across the street from the Amazon.com campus and one block north of a site where Touchstone has proposed a pair of 12-story office buildings.