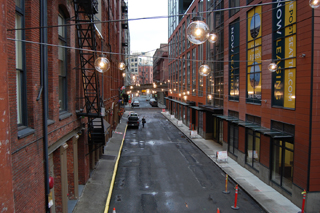 Photo by Jon Silver [enlarge]
People will begin moving into the 208 apartments in The Post on Saturday.

People will begin moving into the 208 apartments Saturday.

“It kind of creates a courtyard feel,” he said. “We expect more people to cut through to get to the ferry” two blocks away.

Goodman also owns the Colman Building, which sits across Post Avenue from the new apartments. The lights are strung between the two buildings for the length of the block, which is between Marion and Columbia streets.

The Owl N' Thistle pub in the Colman Building has been a fixture on Post Avenue since 1991. Two more retail spaces in the new building should help make the street more lively.

“We're likely to see some restaurants or really active retail at the base of the tower,” said Blaine Weber, principal for Weber Thompson, which designed The Post.

Weber said the idea for festoon lights came up early in the design process, modeled off successful examples in Europe. They'll be on a timer so they light up at dusk automatically.

“It really enlivens the space so it has its own sense of place,” he said. “We see an opportunity to close off the street and do a street fair or street festival.”

The new building also has two retail spaces on Western, and another along the pedestrian bridge to the ferry terminal. There's 9,000 square feet in all.

Weber said the architects had to get creative to make the Post Avenue features come together.

Typical back-of-the-house elements such loading areas and electrical transformers had to be put elsewhere, he said, and that required special permission from the city.

Making those changes was not cheap, Weber said, but “there's the potential for creating something special here.”

Dickerson declined to say who the retail tenants will be, but said Goodman has received several letters of intent.

Fifty-four of the apartments have been pre-leased.

The building received a temporary certificate of occupancy last week.