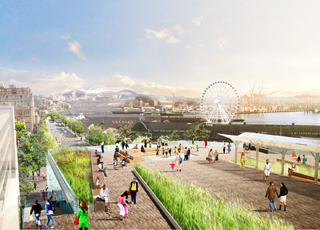 Image courtesy of James Corner Field Operations [enlarge]
Friends of Waterfront Seattle is expected to raise up to $120 million of the $1.07 billion estimated cost of open-space improvements along the central waterfront, including the Overlook Walk being designed by James Corner Field Operations. Groups like this support maintenance at many U.S. public spaces, which is seen as critical for long-term success.

Before the automobile age, traditional streets and squares served the city well as attractions, mixing places and ways from here to there.