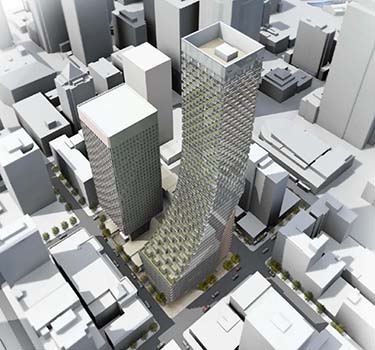 Wright Runstad & Co. is wasting no time getting ready for the Rainier Square makeover.

The first early design meeting for the office, housing, retail and hotel complex is set for 7 p.m. June 17 in City Hall, at 600 Fifth Ave.

The developer wants to build two towers: one with 54 stories containing 750,000 square feet of office space topped by 220 residential units; and a 15-story hotel with 200 rooms.

There also will be 32,000 square feet of retail and a parking garage with space for about 1,200 vehicles.

The iconic Rainier Tower will remain on the block, which is bounded by Union and University streets, and Fourth and Fifth avenues.

NBBJ is designing the project, Lease Crutcher Lewis is the general contractor, and Magnusson Klemencic Associates is the structural engineer.

(Editor’s Note: Story has been corrected to add the name of the general contractor.)

The University of Washington picked Wright Runstad to redevelop the block, which is part of the 11-acre Metropolitan Tract, which the university owns downtown.

Documents from the university show the goal is to start construction in 2017 and finish in 2020. The latest work could start is 2021, which would push back completion to 2024.

But Wright Runstad wants to start before 2017. Wright Runstad President Greg Johnson told the DJC last month he hopes to get a master-use permit this year and start construction in 2015, with new space opening by late 2017.

Documents prepared for the design review meeting call the site “the very heart of Seattle,” in a pedestrian-friendly area that is near some of Seattle's top cultural attractions.

The goal is to design a project that matches the importance of the site. The proposed office/housing tower would have a wide base that narrows as it rises, to complement Rainier Tower's thin base that widens as it rises.

The project documents say: “When Rainier Tower was constructed in 1977, it was a bold vision: one of the tallest towers in the city at the time, a distinctive, unique form in the city, a design that was as much about the experience at the grand plane as about a striking modern profile against the sky.”

“Today we propose another tower — one that is both as bold and as thoughtfully sensitive as its neighbor.”

When the project is done, the project team says, the new Rainier Square will fundamentally change downtown:

“While the current ‘center of gravity' of commercial activity is several blocks north of the site, this development is poised to shift that center south to the heart of the Metropolitan Tract.”