Project of the Month: How an invisible upgrade fixed Pike Place without ‘improving' it 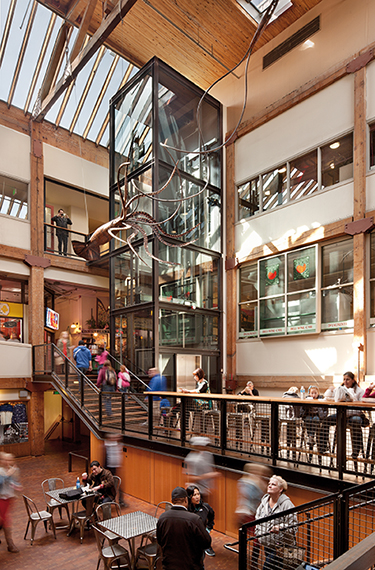 Photo by Lara Swimmer [enlarge]
This new glass elevator in the Economy Market atrium connects all levels. The atrium was re-configured around the new elevator (and the squid sculpture) to provide seating focused around a new demonstration kitchen.

Pike Place Market has a secret — and it's not another ghost.

Behind its trademark chaos and well-loved decrepitude, there is a shiny new array of transformers, pipes, heat exchangers and refrigerators, all working silently and dependably. They're invisible, and that is their beauty.

The upgrades are part of a market renovation that was completed in 2012.

The design is all about what wasn't done. Calls to “improve” the market in any way only make people mad.

Duncan Thieme is partner-in-charge of the project for SRG Partnership, which designed the upgrade. From tenants and other stakeholders of the market, he got not-so-simple instructions: “Don't change anything — except what's wrong with it.”

The market is the heart of Seattle, an iconic urban place that gets over 10 million visitors a year. It's basically a rough mix of century-old ad-hoc hillside construction on nine acres, all clustered around a cobbled street lined with market stalls. 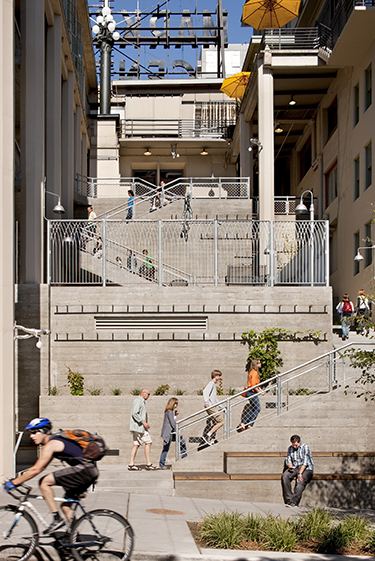 Photo by Lara Swimmer [enlarge]
The market welcomes visitors along Western Avenue, with a rebuilt stair system and new elevators tucked into the hillside.

Few could name the buildings — or distinguish them from one another. Visually and structurally, they are joined almost by happenstance. The strategy for completing the “as built” drawings of the market was similar to what it would be for an archaeological site.

Ben Franz-Knight is executive director of the Pike Place Market Preservation & Development Authority, which provides planning and management for the market.

“Someone once described the market as a bed of oysters,” he said. “They all grow together.”

The cluster of structures was preserved through neglect through much of the 20th century — and then saved from redevelopment in the 1970s.

Preserving the market for the next century was the purpose of the renovation. It's the result of many years of study that showed mounting problems with the structural, electrical and mechanical systems.

The market had seen increasing loads on all systems but no full-scale renovation since the late 1970s and early 1980s. Meanwhile, codes and standards for safety and sustainability changed considerably. In 2008, voters approved funds for an upgrade. 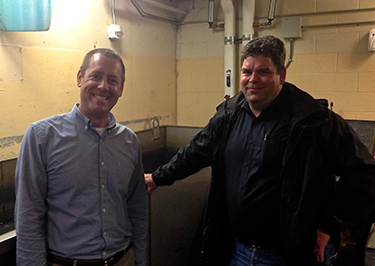 Photo by Clair Enlow [enlarge]
Ben Franz Knight and Duncan Thieme found lots of ways to conserve, even when it comes to the ice that keeps fish cool when they are not being thrown around. 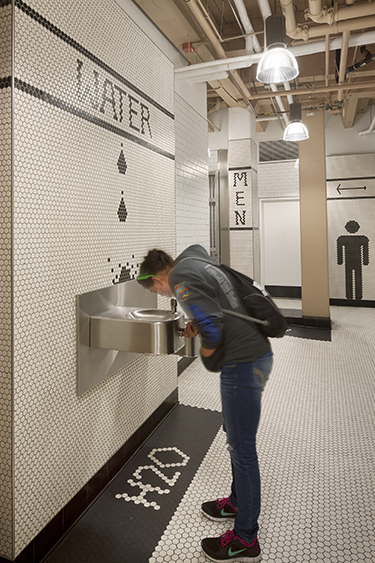 When SRG Partnership was hired all that was certain was that system upgrades were necessary — and must be done without visibly reorganizing or even cleaning up the place.

But not everything could be hidden. The market, tenants and stakeholders had a short wish list of changes: welcoming elevators, better stairs and more restrooms. It made sense that these should be planned and built at the same time. And that's where architecture comes in. How could these be integrated with the iconic market so that their newness was an enhancement, and not an insult?

One answer to that question is the rebuilt Hillclimb, an open-air vertical circulation area down the stairs behind the famous pig sculpture, connecting Pike Place above with Western Avenue below. This area has been sliced out and revised around a new elevator and a second transformer vault, with a series of landings and stairways, and an expanded deck on top. Without changing the character of the market, the public has new access, viewpoints and resting places.

The restrooms are a perfect example of timeless design — coupled with a little fun. Two sets have expanded to four, and no one is aware of the additions unless they need to find one. In old and new locations, they welcome visitors with silhouettes on outer walls designed with traditional hexagonal tiles, in black and white. The signage uses the same graphics, understandable in any language.

The atrium in the Economy Market building along First Avenue got one of the three new elevators. This one stands in the open, a small glass and steel tower beside the suspended giant squid sculpture.

The structural side of the upgrade consisted of careful placement of braced frames and concrete shear walls. If you know where to look, you can now see cross-bracing through some windows that were removed — along with walls — and carefully replaced. Along with re-wiring most of the market, electrical improvements include two large transformer vaults, all behind walls.

Now the oyster bed is truly connected, trading heat and saving energy. A new heating and cooling system has turned the market into a de-facto eco-district, where efficiencies and energy savings can be achieved.

The central plant for the system is a set of giant fluid coolers, pumps and boilers within and beside the parking garage on the hill below Western Avenue. From the coolers, water is distributed in large pipes throughout the market complex. Individual buildings and tenants tap into the system, gaining or offloading heat as needed with their own heat pumps. It is mostly heat that is offloaded (including waste heat from refrigeration), but if sensors back in the main plant determine the water has become too cold, gas-fired boilers start up.

An LED display in the boiler room shows how much gas the boilers have used. Since the system has been operating they have stood mostly idle, according to Franz-Knight, and that's a good thing. Waste heat from the market's refrigeration systems has proven to be enough.

All the changes had to be made without cutting off or casting out tenants, which include the fragile small businesses that fill the commercial spaces and hundreds of residents in PDA-managed buildings within the market.

Construction was carefully coordinated over three years, with a few tenants moving into alternate spaces while their space was revised. Construction was cut back in the busy summer season, and also scheduled around individual tenants. There's really no “off” season at the market. One shop's customers, for instance, seek it out on Valentine's Day.

During design and construction, the team found one last conservation opportunity: fish ice — the stuff that keeps merchandise cool when the fish guys are not throwing it around.
It was getting hauled off at the end of each day, melting in a truck sitting in rush hour traffic.

No more wasted, environment-damaging fuel. Now the ice goes down a chute into a special tank in a storage space, melting away to make room for the next batch.

“Cheers to the team for navigating a project rich with complexity and finding a balance between intervention and preservation.”

“A wonderful example of taming messiness without losing personality.”