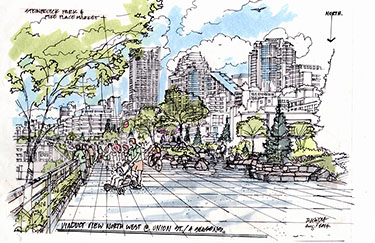 Image courtesy of Park My Viaduct [enlarge]
This view shows a park on the viaduct near Union Street.

Seattle activist and former mayoral candidate Kate Martin said she has reached a new milestone in her effort to preserve the upper deck of the Alaskan Way Viaduct for a 14-block public park.

Martin's group is called Park My Viaduct, and has hired a consultant team to study engineering, design, construction and cost issues.

A press release said the team has been studying the condition of the viaduct for several weeks and will make a site visit Oct. 17. Over the next three months, the team will develop up to five concepts and cost estimates for how the structure could be seismically and structurally stabilized.

Seattle developer Martin Selig is footing the bill for the work, the group said. So far he's pledged more than $150,000 to Park My Viaduct.

The seismically vulnerable viaduct is scheduled to be torn down in 2016, after the new state Route 99 tunnel opens. Park My Viaduct wants to preserve the upper deck — from Pine Street to Railroad Way in Sodo.

“There's no view like it in the world,” Selig told The Seattle Times in July. “Why would Seattle tear down that view?”

Park My Viaduct is looking to raise a total of $300,000, according to its website, including at least $75,000 to gather signatures and submit an initiative for a public vote.

A city-led effort to redevelop the central waterfront has been in the works since 2010, when New York City-based James Corner Field Operations was selected to head the design team.

Preserving the viaduct is not currently part of the city's plans.

Corner is best known for New York's High Line project, which converted a train trestle into an elevated park and opened in 2009.

Park My Viaduct's campaign lauds the High Line as a “wildly successful” gathering place that sets an example for its viaduct proposal.