Images courtesy of The Miller Hull Partnership [enlarge]
Construction is set to begin in 2015.

The Pike Place Market Foundation is launching a campaign at noon Oct. 30 to raise $9 million for MarketFront, a new entrance to the market from the waterfront, with housing, retail and a public plaza.

There will be a parade on Pike Place and a flag raising at the Public Market sign. The parade will include buskers, craftspeople, farmers, fishmongers, merchants, residents and others.

MarketFront is the name for the $66 million complex that will be built on what is now a surface parking lot on Western Avenue adjacent to the Joe Desimone Bridge. The site is within the market's historic district boundary.

Construction is set to begin in 2015 and MarketFront is slated to open in 2016.

MarketFront will connect to the waterfront by a structure called Overlook Walk that will be part of the redeveloped waterfront.

MarketFront will have 15,000 square feet of retail (including a brew pub); more than 30,000 square feet of open space in a plaza and view deck; space for farm or craft stalls on the roof terrace; 40 low income apartments for seniors; a new Neighborhood Center with additional social services; 300 covered parking spaces; and public art.

The site was originally home to the Municipal Market Building that was constructed in the 1920s and torn down in 1974 after a fire. The PDA said nothing has been built there because of the challenging location above the BNSF train tunnel. 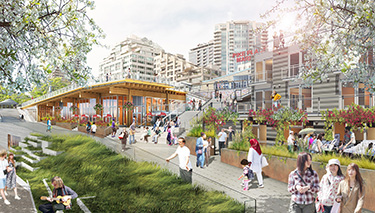 [enlarge]
MarketFront will be a new entrance to the market from the waterfront, with housing, retail and open space.

The Miller Hull Partnership designed MarketFront and Sellen Construction is the general contractor.

Starting Oct. 30, donations may be made at http://www.marketfront.org. Donors of $5,000 will get their name engraved on a bronze hoofprint leading to the MarketFront Plaza. Names will also be engraved on galvanized steel charms that will hang from a railing at MarketFront for a donation of $180.