Flight museum considers putting a roof over planes stored outside 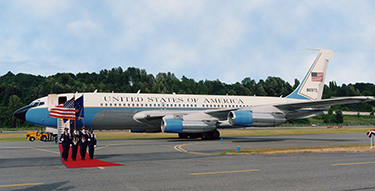 Image courtesy Museum of Flight [enlarge]
This Air Force One jet is on display outdoors at the Museum of Flight. It carried presidents Eisenhower, Kennedy, Johnson and Nixon, and is on loan from the National Museum of the U.S. Air Force.

The Museum of Flight has filed plans with the city of Tukwila to build a structure to cover historic aircraft that now are displayed outside.

Mike Bush, director of marketing and public relations, said the idea is to protect the aircraft from the elements. They include a British Airways Concorde, the first Boeing 747, a 787 Dreamliner, and the first jet Air Force One, which was used by former presidents Eisenhower, Kennedy, Johnson and Nixon.

Plans filed with the city call for a 135,000-square-foot roof structure, which would cover the museum's airpark where aircraft are displayed, adjacent to the Charles Simonyi Space Gallery.

The sloped-roof structure would be 460 feet long and 315 feetwide, with space for about 20 aircraft, according to Minnie Dhaliwal, planning supervisor with the city.

The plans on file call for starting construction next March and completion in June 2016.

But Bush said no start date has been set. He said the goal is to cover the airpark at some point, but planning has just started. The Museum of Flight board has not approved the project, and no design and construction team has been picked.

“Nothing is set in stone,” he said. “Right now it's just in the thinking stage.”

He said the aircraft need to be protected.

“The rain takes its toll on things,” he said. “These are very, very important pieces of history. We have some absolutely beautiful one-of-a-kind airplanes.”

The Museum of Flight is the largest nonprofit, privately owned air and space museum in the world, he said.

The Puget Sound Business Journal first reported on plans to build the roof.