Apple-picking robot due for test this fall 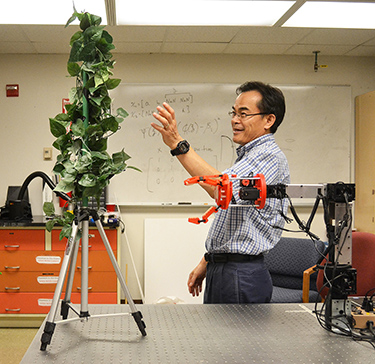 Engineers and scientists at Washington State University say they are creating a robot that can pick apples.

The trick is making a device that is gentle enough to not damage fruit but fast enough for commercial use.

A research team from WSU Tri-Cities and WSU Center for Precision and Automatic Agricultural Systems are using a $548,000 federal grant for the project, and plan to test a working prototype this fall.

Manoj Karkee, shown here, is a WSU assistant professor of biological systems engineering. He said making an apple-picking robot is more difficult than making robots for industrial uses. The team is trying to make a robot that moves efficiently without damaging the fruit and tree. It will be assisted by a human operator.

The robot's arm and “hand” has eight motors. Cameras and sensors allow it to grasp and twist fruit. Algorithms identify color, shape and texture, and differentiate fruit from the tree.

WSU said in a press release that more than 15 billion apples are harvested annually in the state but farmers often can't find enough people to pick the fruit. WSU said an apple-picking robot could potentially save growers millions of dollars.