2nd & Pike tower will be ‘transformational' 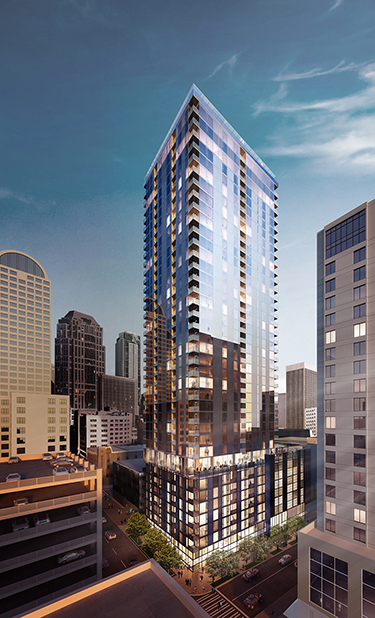 Image courtesy of Urban Visions/Studio 216/Olson Kundig [enlarge]
The tower will have 340 luxury apartments, a rooftop fitness club, “sky-bar” on the eighth floor, and four glass cubes with views up, down and all around.

Urban Visions has started building a 39-story tower at the southeast corner of Second Avenue and Pike Street in Seattle.

It will have 340 luxury apartments averaging 950 square feet, 246 underground parking stalls, a dog park, and about 12,000 square feet of retail that will include an eighth floor “sky-bar” and restaurant with views of Pike Place Market.

Each apartment will have a deck, and there will be a fitness club on the rooftop.

One dramatic feature of the structure will be four glass cubes — with glass bottoms — that people can stand in and look around at the market and the retail core.

The site is near the Four Seasons, Russell Investments Center and Fifteen Twenty-One Second Avenue. Greg Smith of Urban Visions called them the best hotel, office and condo developments in the city.

Smith said 2nd & Pike will be Seattle's best apartment project: “I think it's going to be a great piece of architecture for the city.”

Tom Kundig of Olson Kundig is the design architect for the apartments, and Ankrom Moisan Architects is the architect of record. Sellen Construction Co. is the general contractor. Magnusson Klemencic Associates is the structural and civil engineer.

Smith called the tower “transformational” and said it will be the missing link between Seattle's retail core and the market.

The Seattle developer also plans an 11-story office building nearby at 1516 Second Ave., where the Chromer Building stands today. Smith said he hopes to start construction on that next year.