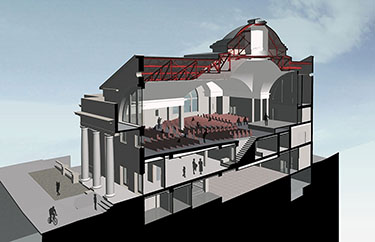 Images from Weinstein A+U [enlarge]
Town Hall has three venues: the great hall that seats 900, a downstairs space that seats 275 and a smaller space for 75. 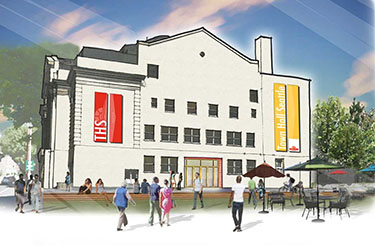 [enlarge]
A new west entrance will replace the entrance on Seneca Street.

Town Hall Seattle has kicked off a $30 million capital campaign to renovate its century-old building at 1119 Eighth Ave. on First Hill.

A spokesman for the nonprofit arts and culture organization said the goal is to start construction next summer. The 37,500-square-foot hall will be closed during the renovation, which is expected to take a year.

Point32 is managing the project, Weinstein A+U is the architect, Jaffe Holden is the acoustic consultant and Sellen Construction is the general contractor.

Historic elements on the interior and exterior will be restored, and the structure will get seismic bracing.

Matt Aalfs, principal and lead designer at Weinstein, said the bracing will mostly be hidden to preserve the historic character.

“It's really like we're doing surgery on the building,” Aalfs said.

The 42-foot-diameter copper dome — long covered with tar to patch leaks — will be replaced. Aalfs said the new dome will match the contours and shape of the original, which also contains asbestos.

A new HVAC system will be installed within the 12-foot-tall dome.

Town Hall contains three venues on three levels: the great hall upstairs that seats 900; a downstairs space that seats 275; and a smaller space on the main level that seats 75.

A new space with a bar and catering services will be built in the downstairs venue.

A new west entrance along the alley will replace the entrance on Seneca Street. It will lead to the downstairs venue and will have a spacious lobby.

The entrance to the great hall on Eighth Avenue will be retained.

Acoustics, audio-video systems and theatrical lighting will be upgraded to create a digital stage that can handle events like TED talks and YouTube video presentations.

Other upgrades include more restrooms, a new elevator and modernizing the existing elevator.

Aalfs said his firm has been working on the project for about two years and plans to seek permits later this month.

Town Hall Seattle's programs will be held at other venues throughout the city while the renovation is underway. The group holds more than 400 events yearly.