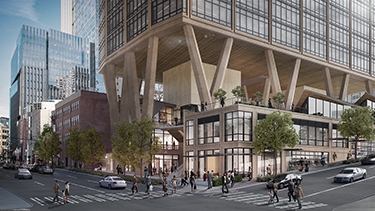 Image by Studio216 [enlarge]
This rendering shows the current view of 2+U from First and Seneca.

The Seattle Design Commission last week reviewed 2+U, a 38-story office building planned for the block between First and Second avenues and Seneca and University streets.

Skanska USA Commercial Development is the developer of the project, previously called 2&U, which will cover roughly three quarters of the block.

Early design studies show the tower at 1201 Second Ave. lifted up on structural columns, with publicly accessible space underneath.

Skanska said approvals seem to be on schedule for construction to start in August, with completion set for late 2018.

Pickard Chilton of New Haven, Connecticut, is the design lead. Kendall/Heaton Associates of Houston, Texas, is the architect of record. Graham Baba Architects is the consulting architect on the ground-floor open space and retail and Swift Co. is the landscape architect. Both are Seattle firms.

The Galland, Seneca and Friedman buildings will be demolished to make way for the project. They are owned by Samis Foundation, which has given Skanska a 99-year ground lease for the property.

The Diller Building at First and University has a different owner and is not part of the development.

Skanska has asked the city for a partial vacation of the alley through the block to accommodate the proposed lifted design.

The Design Commission approved a package of benefits Skanska proposed to compensate for the partial vacation, but details must still be worked out with the commission.

The commission's recommendation will go to the Seattle Department of Transportation, which will recommend to the City Council whether to approve the partial vacation.