Group sees Pier 86 as a huge canvas for artwork 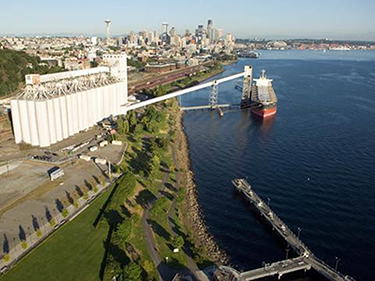 A committee called Friends of Art on Pier 86 will complete a feasibility study this spring about putting some kind of public art on the silos and grain elevator at Pier 86 in Seattle.

The study was funded by Seattle Department of Neighborhoods with cooperation from the Port of Seattle. A draft report on the study was presented at a Jan. 20 community meeting.

The draft mentions banners, lighting, a video loop and paint as potential ways for adding art to the massive structure.

Betty Winfield, chair of FAP86, said in an email that having art there would enhance Seattle's waterfront entrance.

FAP86 is taking the report to community councils and other organizations for feedback during February and March.

The final feasibility study will be presented to the city and port in early April.