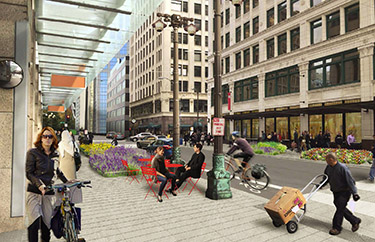 Image by Gustafson Guthrie Nichol [enlarge]
This image was produced as part of an earlier design vision for Pike-Pine, and shows Pike and Third with new sidewalks, plantings and furniture. It does not necessarily show what will get built as part of the city’s project.

The city of Seattle plans to spend $20 million making the Pike-Pine area more inviting to pedestrians.

Qualifications from design teams are due by March 23, according to a notice in the March 2 DJC.

The area is Pike and Pine streets, from First Avenue to Melrose Avenue, and the design is expected to cost between $1.6 million and $2.1 million.

The goal is to improve pedestrian connections between Capitol Hill and Pike Place Market, and give the corridor a unique identity, according to the RFQ.

Another goal is to create small places along sidewalks for activities and events, with places to sit, eat, drink and people watch. 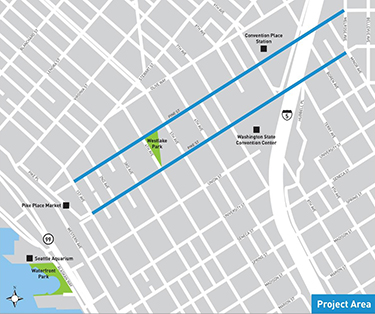 Courtesy of the City of Seattle [enlarge]
The area is along Pike and Pine streets, from First to Melrose avenues.

Pike and Pine deserve the attention, said Steve Pearce, project manager in the city's Office of the Waterfront, which is managing the streetscaping project.

“They're really the most important streets connecting the high energy and high density of Capitol Hill to the retail core and to the heart of the city and Pike Place Market,” he said.

The project will focus primarily on the space between the sidewalk curb and adjacent buildings.

Pearce said the tight budget will require “smart and surgical approaches” to tie streets together. “We will not have the same level of investment on every block,” he said. “Inevitably there will be a base level of improvement that we will apply to the whole corridor, and some places will have more intensive rebuilding of the sidewalk environments.”

There are some big design challenges such as the “dead zone” over Interstate 5 and around the Washington State Convention Center. The RFQ also notes the “poor physical condition and quality of street life” on blocks west of Fourth Avenue.

The noise and “visual cacophony” of the I-5 overpasses need to be addressed, Pearce said, possibly with noise walls, green walls, plantings and special lighting.

He said the streetscaping will be coordinated with other public and private projects such as Washington State Convention Center's work to rebuild the sidewalk on Pine Street between Ninth and Boren as part of its expansion.

The Pike-Pine project is intended to capture the spirit of the Pike-Pine Renaissance Streetscape Design Vision, which was commissioned by the Downtown Seattle Association.

Funding for the Pike-Pine improvements will come from a local improvement district the city plans to start forming in first half of 2018, said Pearce. The LID is intended to raise $200 million toward the waterfront redevelopment by assessing owners whose property is expected to increase in value because of that project.

Seattle landscape architecture firm Gustafson Guthrie Nichol was design lead for the Pike-Pine Renaissance plan, which is a set of design standards to make the retail area between First Avenue, Interstate 5, Union and Virginia streets more inviting to pedestrians and bicyclists. The plan called for improvements that ranged from holiday lighting to safer streets. Implementation was estimated to cost between $27 million and $54 million.

Shannon Nichol, a GGN founding principal, said Pike and Pine are at the core of that plan. She called them “some of the most beautiful streets in the world,” with great architecture, views and retail — bookended by Pike Place and Melrose markets. “They just need some tweaks and cleaning up for people to experience that.”

Pike and Pine are unconventional “Main” streets, she said, because of the hill and freeway crossing. The distance seems longer than it is because it is intersected by I-5 and lacks a coherent feel.

The sidewalks are paved in a variety of materials that make people feel as though they are walking through a lot of unrelated retail areas, she said. Nichol said a boardwalk-like path could be created by paving all the sidewalks in concrete with a plank-like texture.

Also, the long crosswalks near the I-5 overpasses could be eliminated by squaring off the sidewalks, she said, giving cars a narrower turn radius but shortening the crossings for pedestrians.

Nichol declined to comment on whether her firm will seek the Pike-Pine design work.

“Either way, we're really hoping to see a great response to this,” she said, “because it's got to be done right.”