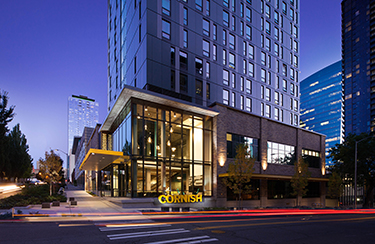 Capstone was one of the winners in the 2016 Student Housing Business Innovator Awards for the residence hall and academic building, which opened in July 2015 at 2025 Terry Ave.

Cornish Commons was developed by CDP in collaboration with Cornish College of the Arts.

It won awards for best public/private partnership, most creative public/private financing and best new development. There were over 100 entries, and 23 awards.

When the ground lease expires in 2056, Cornish will own the building.

Cornish Commons has housing for students, practice studios, lounges, a community kitchen, two floors for academic spaces, and a first floor commons for students and faculty.

It earned the LEED gold for Homes Midrise Certification and was named 2015 Building of the Year by the Seattle Daily Journal of Commerce.

For all the winners, go to http://tiny.cc/9jqcdy/.