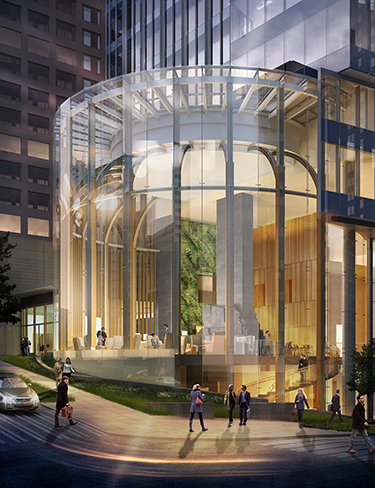 You can now see the structure of what Schnitzer West calls an “iconic element” at the https://goo.gl/maps/JmjHVp8TRsQ2" target="_blank">corner of Fifth Avenue and Madison Street in downtown Seattle.

The 70-foot-wide and 60-foot-tall glass rotunda was designed to be a cool gathering place for tenants in Madison Centre. Sellen Construction earlier this week finished the steel frame for the rotunda.

Schnitzer West says the rotunda will be a beacon of light at night when seen from the Nakamura U.S. Courthouse and the Seattle Public Library. During the day, the rotunda will be filled with natural light and anchored by a three-story living wall and fireside lounge.

The 37-story Madison Centre will open in the second quarter of 2017, with 746,000 square feet office space, 7,800 square feet of retail and 4,500 square feet of roof terraces. There will be alternative work spaces, a large conference center, 5,200-square-foot fitness center and seven underground parking levels.

Schnitzer West and Cornerstone Real Estate Advisors are developing the tower in a joint venture. Cornerstone is a global real estate investment manager.

NBBJ is the architect for the core and shell.