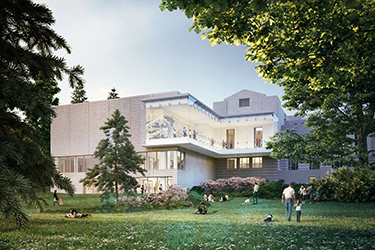 Seattle Art Museum offered a few more details on Thursday about the $49 million renovation and expansion it has proposed for the Asian Art Museum in Volunteer Park.

SAM wants to add gallery and education space, and improve the 83-year-old building's plumbing, electrical and climate-control systems. Seismic work and improvements to the loading area are also planned.

Additions would total around 9,600 square feet.

A 7,000-square-foot expansion at the southeast corner would include a 2,650-square-foot gallery, community meeting room, offices, new space for education programs, and an Asian art conservation studio. The rest of the additional space is the loading dock and receiving area on the north side.

The additions would not alter the museum's familiar west face, where the main entrance is located.

Construction would start next fall and is expected to take a year. The museum would reopen in early 2019.

LMN Architects is the designer. BNBuilders is the general contractor/construction manager.

In remarks to the media yesterday, Sam Miller of LMN said the museum's connection to the park has been diminished as additions over the years have changed the east side.

Preliminary designs would restore the connection using a variety of tools, including more transparency, additional landscaping, and perhaps a set of doors that would allow activities to spill outdoors.

The 53,800-square-foot art moderne-style building is listed as a city landmark.

“We plan to bring the historical part of the building back to where it was so you can't tell we were there,” Miller said.

The building received seismic improvements in 2007, but interior partitions are considered vulnerable and need reinforcement.

“Trust me, you do not want to be in those galleries if an earthquake hits,” Miller said.

SAM says the upgrades will allow the museum to continue showing important Asian art exhibitions, and serve as a community and cultural resource through its collection, education programs and events.

The museum hasn't been substantially restored or renovated since it was built. It has no air conditioning, limited humidity control and the walls aren't insulated.