Board to consider 1923 West Coast Printing building for landmark status 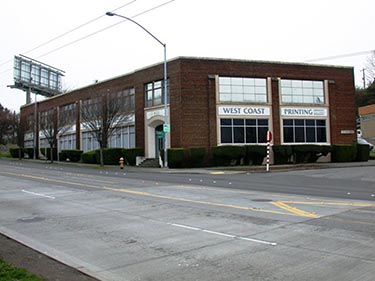 Image from Seattle Department of Neighborhoods [enlarge]
The two-story building was constructed in 1923 as a cosmetics factory for J. W. Kobi Co.

The West Coast Printing building is on a Rainier Avenue site where about 180 apartments are planned, and will be considered for nomination as a city landmark at a meeting Nov. 16.

The Seattle Landmarks Preservation Board meeting is at 3:30 p.m. in Room L2-80 of Seattle City Hall at 600 Fourth Ave.

The 1923 two-story West Coast building at 622 Rainier Ave. S. would be demolished for the project proposed by Bellevue-based Rainers Consulting. The developer plans two six-story and one five-story building, with 8,000 square feet of retail and 150 underground parking stalls.

Studio19 Architects of Seattle is designing the project. If the West Coast Printing building is designated a landmark, Hui Tian, owner of the design firm, said Rainers has a more costly alternative that could entail keeping the building for retail and putting apartments on top.

Rainers Consulting recently acquired the 32,000-square-foot trapezoidal site from I & T Co. for $5.95 million, according to King County property records. It is about three blocks from the First Hill Streetcar station at 12th and Jackson.

The complex would have a rooftop deck, central courtyard and elevated walkways with artwork connecting the buildings. Weisman Design Group is the landscape architect.

This is Rainers' first major development in Seattle, Tian said, but the firm plans others, and is looking at the University District.

Image by Studio 19 Architects [enlarge]
Bellevue-based Rainers Consulting wants to have 180 apartments in three buildings, with retail and underground parking.

The landmark application was prepared by David Peterson of NK Architects.

The nomination process is required in certain circumstances as part of getting a land use permit if sites have a building that could meet the city's landmark criteria.

A landmark cannot be significantly altered without approval from the Preservation Board.

The West Coast Printing building was constructed as a cosmetics factory for J. W. Kobi Co. The design had some restrained Gothic Revival or Collegiate Gothic elements, but the structure was constructed more simply than the design, according to the application.

West Coast Printing occupied the building and purchased the property (as the I & T Co.) in 1954.

The printing company was founded in 1930 by brothers Theodore (Ted) and Paul Tomita. The firm specialized in Japanese typesetting, business cards and restaurant menus, according to the application.

In 1942 during World War II, the U.S. government removed people of Japanese ancestry, including the Tomita brothers, from the West Coast to internment camps. The Tomitas and their families were sent to the Minidoka camp in Idaho. They closed the shop, the application notes, but stored their lead type and printing equipment with Caucasian friends during the war.

West Coast Printing has operated successfully over the decades, according to the application.

In April 1992, after the verdict in the Rodney King beating trial in Los Angeles was announced, the building was firebombed. Competing printers took over the company's orders until repairs could be made, according to the nomination application, which is at http://tiny.cc/1qukgy/.