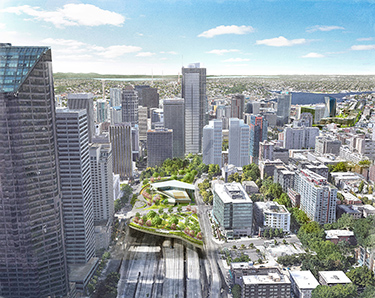 Image by Studio 216 [enlarge]
This conceptual rendering, looking north, shows a new lid with an extension of Freeway Park and a new Downtown/First Hill elementary school.

The Seattle Office of Planning & Community Development recently got $1.5 million for an engineering and financial feasibility study of the potential benefits of lidding Interstate 5 between Madison Street and Denny Way.

The money is part of the public benefit payments from the Washington State Convention Center expansion.

A group called LID I-5 has been promoting the idea in Seattle since 2015. The group says Freeway Park and the original WSCC already have lids, and new lids would help to reconnect Capitol Hill, First Hill, Denny Triangle and downtown.

Lids will create platforms for adding parks, affordable housing, civic facilities, and commercial development. The group says they will also help mitigate noise and air pollution, and make it easier for people to walk.

OPCD is expected to issue a request for proposals for the study before the end of the year, according to John Feit, Lid I-5 co-chair.

The study is expected to be complete in December of 2019.

Lyle Bicknell, a principal urban designer with OPCD, is managing the study for the city.

A recent volunteer design group worked with the Pike/Pine Urban Neighborhood Council to produce conceptual designs and illustrations for lidding I-5 in Seattle.