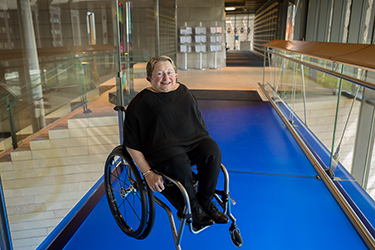 Photo by Daniel Sheehan [enlarge]
Karen Braitmayer is an architect and founder of Studio Pacifica, which specializes in accessibility consulting and education about inclusive design.

Karen L. Braitmayer of Seattle-based Studio Pacifica won the 2019 Whitney M. Young, Jr. Award from the American Institute of Architects for promoting equity and inclusion as a consultant and educator.

Whitney Young was a civil rights leader and former head of the National Urban League. It is given by the AIA Board of Directors and Strategic Council to an architect or architectural group for working on relevant social issues.

In a press release, the AIA said Braitmayer is nationally recognized for her leadership and advocacy on civil rights for people with disabilities, and said she has smashed physical and social barriers for herself and others.

Braitmayer is an architect, longtime wheelchair user and founder of Studio Pacifica, which specializes in accessibility consulting and education on inclusive design. It advises agencies, local governments, developers, contractors, businesses and other design professionals about accessibility in housing, commercial, retail, institutional and educational projects.

Locally the firm worked on The Century Project for the Space Needle, the Yesler Terrace redevelopment and Cornish College's student housing.

Braitmayer is a fellow of the American Institute of Architects, and served on the advisory board of the Northwest ADA Center and the board of Northwest Center, which focuses on people with developmental disabilities.

She was a member of the Washington State Building Code Council from 1994 to 2001, and remains involved in the state's accessibility code.

In 2010, President Barack Obama appointed her to the U.S. Access Board, an independent federal agency focused on accessible design.

The AIA cited her multifamily housing work, which has ensured rental options for people of all abilities; her ability to identify issues early for clients; and her work on educational projects that help future generations.

In another letter, Duane Jonlin, Seattle's energy code and energy conservation advisor, wrote that “(Braitmayer's) argument style tends to be spunky and inquisitive, rather than confrontational, and this has made her a formidable advocate in public venues. As both a practicing architect and a formal representative of this state's people with disabilities, she has continually forged a path that works for both constituencies.”

Braitmayer holds a bachelor's degree from Rice University and a master of architecture from the University of Houston.