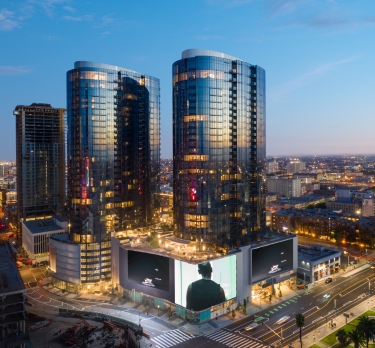 Photo by Hunter Kerhart [enlarge]
The 648-unit Circa complex was completed in September.

Circa, a complex in Los Angeles with two 35-story elliptical apartment towers, won the 2018 Charles Pankow Award from the American Concrete Institute of Southern California for innovative use of concrete.

Bellevue-based Cary Kopczynski & Co. was the structural engineer on the 2 million-square-foot project, developed by Jamison Properties of Los Angeles. It opened in September, and is across from Staples Center.

The tower have 648 apartments over an eight-story podium, which houses retail, parking and an amenity deck with a pool at the eighth floor.