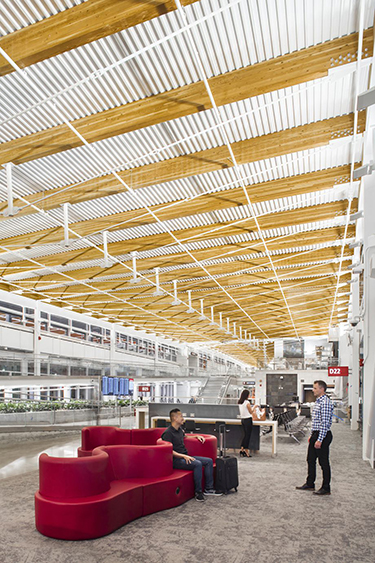 Photo from HOK [enlarge]
At Concourse D Annex, the design-build team had to redesign the building’s foundation due to unstable soils.

Concourse D Annex is a 32,400-square-foot building with six gate waiting areas, concessions, charging stations and restrooms. It also has a mezzanine of over 7,000 square feet.

A news release from DBIA says this project benefited from design-build when the team had to redesign the building's foundation due to unstable soils encountered while footing excavation and formwork operations were underway. The $25.75 million project was finished on schedule (12 months) with no safety incidents.

Work at Mud Mountain Dam in Enumclaw involved re-armoring the dam's 9-foot-diameter tunnel that is used to flush sediment known as bedload. Here, the team developed an alternative design to line the 1,900-foot-long, horseshoe-shaped tunnel with granite block instead of steel. This extended the life of the tunnel, reduced safety risk and helped the project finish $400,000 under budget and in 22 months — a year ahead of schedule.

In Redmond, the International Software Developer Buildings project consisted of two concurrent 180,000-square-foot tenant improvements in adjacent buildings. Two atriums were added to one building and three to the other. These new spaces have collaborative areas, conference rooms, kitchenettes, workspace “neighborhoods” and breakout areas.

The news release says design-build allowed this project to be completed in six months and in phases, minimizing the impact to people in the building.

DBIA's Project of the Year for 2019 was the Sharp Chula Vista Ocean View Tower in California.

“Design-build continues to deliver impressive results on projects of all types and sizes in communities throughout the nation. One look at this year's national DBIA award winners shows why design-build is the fastest growing and most popular delivery method in America,” said Lisa Washington, DBIA executive director/CEO, in a statement.