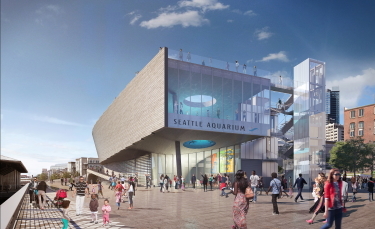 Renderings provided by LMN Architects [enlarge]
The design for the 50,000-square-foot expansion is 90% complete. Construction is slated to start in 2021. 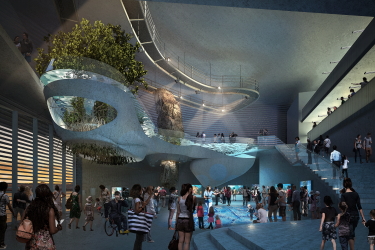 [enlarge]
The Ocean Pavilion will have a 325,000-gallon tank with over 100 species, including sharks, rays and fishes. 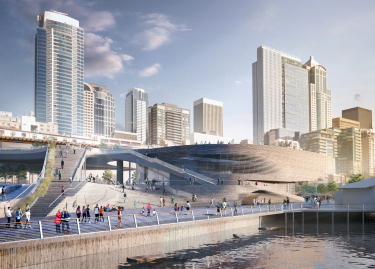 [enlarge]
The new pavilion will be west of the new Alaskan Way, east of piers 59 and 60.

The Seattle City Council voted unanimously Monday to allocate $34 million for an expansion of the Seattle Aquarium, an aquarium official said.

Construction is slated to start in 2021 and the expansion to open in 2023.

LMN Architects is designing the project, now estimated to cost $113 million, with the design 90% complete. Turner Construction Co. is the general contractor and Thinc is the exhibit designer.

Ocean Pavilion will be west of the new Alaskan Way and just east of piers 59 and 60, creating a campus that includes the current aquarium. It will have a 325,000-gallon tank focused on the Coral Triangle in the South Pacific — one of the most biodiverse areas in the marine world. The tank will have over 100 species, including, sharks, rays and fishes. There will also be other exhibits on species in the Triangle along with education and gathering spaces.

The aquarium expansion is a key part of the Seattle central waterfront redevelopment. Overlook Walk, a major component of the redevelopment, will connect with Ocean Pavilion, where people can walk around the roof and see inside the tank.

The city owns the aquarium, which is managed by the non-profit Seattle Aquarium Society. The society is developing Ocean Pavilion.

Besides the city, funding for Ocean Pavilion comes from King County, the state and $60 million from the society. So far, the society has raised nearly $25 million of that.