New $1.5B PDX main air terminal will be a ‘walk through the woods' 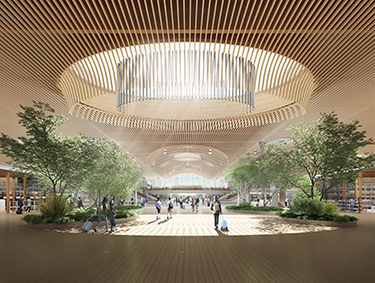 Image from Port of Portland [enlarge]
The most prominent feature of the new main terminal will be its wooden roof with skylights.

Portland International Airport turned 80 earlier this month and the Port of Portland celebrated by showing off new images of what its $1.5 billion new main terminal will look like when it opens in spring 2025.

“While the space will look and feel different, we are keeping the heart and soul of the airport that Portlanders know and love — easy to navigate; bright, open spaces; and local shops and restaurants — it will still feel like home,” said Vince Granato, chief projects officer at the port, in a news release.

HSJV, a joint venture of Hoffman Construction and Skanska, is building the terminal under the construction manager/general contractor method. The total contract amount to date is $537.2 million, and the port has a 20% participation goal for small- and minority-owned businesses. ZGF is the architect.

The port says the design of the 175,000-square-foot terminal focuses on health, wellbeing and safety — with nature-infused interiors, an earthquake-resilient structure, expanded spaces and more plants. The most prominent feature will be its regionally and sustainably sourced wooden roof with skylights that will stretch across the expanded lobby and ticket areas. The roof reminds travelers that nearly half of Oregon is covered with forests.

“The roof design was inspired by the forests of the Pacific Northwest and the feeling you get while walking through the woods, the experience of light filtering through the trees, and the protection of the tree canopy,” said Sharron van der Meulen, ZGF partner and lead interior designer for the project.

The port says much of the terminal's design is inspired by the human-friendly scale of Portland's city blocks and favorite neighborhoods. That includes independent storefronts clustered along a tree-lined “street” and cafe seating spilling out onto “sidewalks.” There will be 20 new concession spaces and additional areas for public art.

According to the port, the project will double the size of the main terminal while using half the energy per square foot as the existing space.

The new main terminal is the largest of five major projects in the airport's capital improvement program called PDX Next. Other projects under the program include the recently opened Concourse E, with seven new shops and restaurants, and six gates for Southwest Airlines; a new Concourse B set to open in fall 2021, with two new eateries and six gates for Alaska Airlines; parking additions and a new rental car center also opening in fall 2021; and the rental car wash and fuel center that opened in 2018.