Will America's next big city rise from the desert? 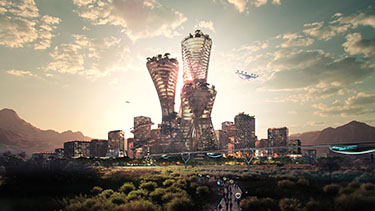 Rendering by Bjarke Ingels Group and Bucharest Studio [enlarge]
Equitism Tower would be Telosa’s equivalent of the Space Needle.

Marc Lore, billionaire and former president of Walmart, has big plans for the future of American cities. Last week, he unveiled plans for a new city, ‘Telosa,' to be built in an as yet unidentified American desert. While the project is not funded, and information on how it would be remains opaque, Lore announced Telosa with the release of a 150,000-acre design proposal. The ‘city' is designed by the Danish Bjarke Ingels Group.