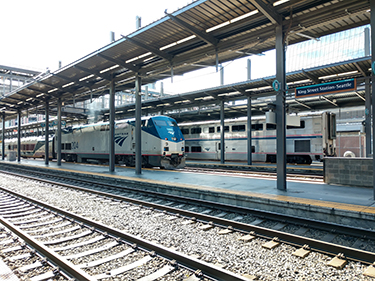 Washington State Department of Transportation says an 85% drop in ridership on the Amtrak Cascades route since the COVID-19 outbreak is necessitating cuts in service.

In Oregon, Cascades service between Eugene and Portland is down to one daily roundtrip (trains 500 and 505) and will be running on the weekday schedule seven days a week. All other Cascades trains in Oregon are suspended.

The Amtrak long-distance train, the Coast Starlight, continues to connect Seattle and Eugene and other cities in between with one daily roundtrip.

WSDOT also made a few changes at some stations on the Cascades route: in Olympia/Lacey and Kelso, only the platforms will be available, with no access to the station buildings. Volunteers at those stations will not be available to assist with ticketing or boarding.

Finally, food and beverage service on the Cascades route has been suspended, although passengers can bring their own food and nonalcoholic beverages with them.

WSDOT says it is deep cleaning Amtrak trains and stations, and wiping surfaces frequently. The agency notes it's easy to maintain personal distances with the reduction in ridership.

WSDOT may make additional service changes if ridership continues to be low.