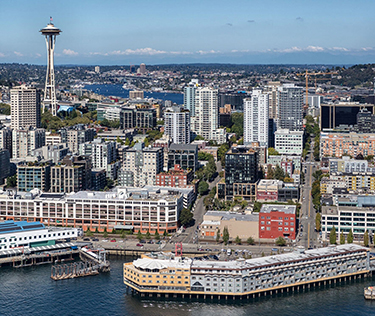 The Downtown Seattle Association is issuing regular updates on the economic impact of COVID-19. DSA is drawing from a variety of sources — some newspaper and analyst reports, and some government figures. Most but not all are specific to downtown.

As of Wednesday, some of the grim numbers include:

• A projected 9% unemployment rate for King County. That compares with 3% at the beginning of the year. From March 8 to March 15, county unemployment claims rose over sixfold, from 5,834 to 37,296.

Statewide, there were 181,975 new claims for the week ending March 28, per state Employment Security Department numbers released yesterday. That's up 41% from the prior week.

• Nationally, also for the week ending March 28, 6.6 million people applied for unemployment. That's on top of 3.3 million claims the week before. Until last month, the national record for unemployment claims was 695,000 in 1982. That was exceeded almost tenfold last week.

• Goldman Sachs estimates the national unemployment rate could peak at 9% this year. (It was about 3.5% in February.) Some estimates are higher.

• In Washington state, citing the Economic Policy Institute, DSA says 450,000 more jobs could be lost by July. That's about 15.6% of all private sector jobs. Downtown, hardest hit will be 46,700 jobs in retail, restaurants, hotels and arts and entertainment. Nearly half of those are restaurant workers.

• Per Visit Seattle, the downtown hotel occupancy rate sank below 40% by March 7, then below 20% on March 14. It's now below 8%, with revenue down over 92%. Over 21 downtown hotels have now closed their doors and furloughed staff. One example: 227 staff temporarily laid off at the Edgewater Hotel last month.

DSA also cites Bloomberg figures that, in the Seattle-Bellevue-Tacoma area, 114 hotels are carrying almost $1.6 billion in collateralized mortgage-backed securities — debt that is harder to renegotiate than conventional bank mortgages.

• For apartments, DSA cites CoStar estimates that the downtown residential vacancy rate could increase to 14% next year. That compares with about 4.6% at the end of 2019. Commercial Analytics says leasing is down and requests for rent relief are up.

• In the commercial office market, CoStar projects that the downtown vacancy rate could hit 9% next year. That's about double the current rate.

• On the retail side, CoStar says the downtown vacancy rate could reach 6% next year — a fourfold increase from the current rate. Subleasing activity is already increasing.

• Loses in the greater Puget Sound arts and entertainment sector could surpass $74 million by the end of May, per ArtsFund. (An example: Northwest Folklife Festival was just postponed for first time in 49 years.) About 2,000 had been laid off, as of March 14, in that sector.

• By year's end, the city of Seattle is now projecting a $110 million drop in general-fund revenue; that's about 7% of roughly $1.6 billion in previously projected revenue.

(Editor's note: The story has been updated to show a 9% unemployment rate for King County.)