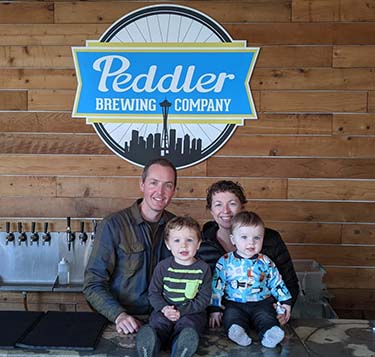 Photo courtesy of Peddler Brewing Company
Peddler’s final day will also be its 9th Anniversary celebration on March 5. Owners Dave and Haley Keller are pictured with their two children.

Owners Dave and Haley Keller recently announced that they will be closing Peddler Brewing Company in March. Peddler, at 1514 N.W. Leary Way, has been a mainstay of Ballard's burgeoning brewery district since it opened in 2013. Peddler was conceived to blend the Kellers' two loves: beer and biking,