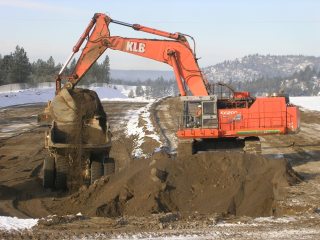 Photo courtesy of WSDOT [enlarge]
KLB Construction won an award for its work on US 395 in Spokane County.

Eight transportation construction projects were recently selected as winners of 2007 Excellence in Contract Administration Awards by the state Department of Transportation and the Associated General Contractors of Washington. Awards were presented to the administrative team including the contractor, its project manager and the WSDOT project engineer.