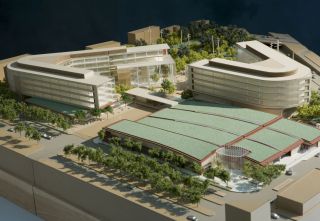 Photo courtesy of the Bill & Melinda Gates Foundation [enlarge]
The campus will feature two light-filled V-shaped buildings symbolizing the organization’s connection to Seattle and its efforts to reach out to people around the world.

The foundation's campus is a crosswalk away from the Seattle Center, at 500 Fifth Ave. N. The campus, which covers a city block, will be big enough for 1,200 employees plus large meetings and events. Gates also will have its own interactive museum, a 15,000 square-foot center telling the story of the foundation's work. In all, the headquarters buildings will be about 900,000 square feet.

The design features two intersecting, light-filled, V-shaped buildings with a private, landscaped courtyard, symbolizing the organization's connection to Seattle and its efforts to reach out to people around the world. The nearly transparent structure — including glass interior walls and fixtures — is supposed to elicit confidence in the foundation's mission, by making the enterprise inside clear to the outside world, as well as connect the people who work at the foundation, said Steve McConnell, managing partner at NBBJ, the Seattle-based architects for the project.

“It will be dramatically different than being on 20 floors in a high rise,” McConnell said.

In keeping with Seattle's citywide sustainable building commitment, the project is targeting LEED Gold certification. Green building elements include an underfloor air distribution system, a rainwater collection and storage system providing most of the water for irrigation, water features and toilets, green roofs and air-cooled chillers and thermal energy storage which conserve water and capitalize on lower off peak air temperatures.

The Gates Foundation was started by Bill and Melinda Gates in 2000. Foundation spokeswoman Heidi Sinclair said putting on a more public face will draw more attention to the issues Bill and Melinda Gates care about and the work of the organizations they support. The Gates Foundation is using its $37.3 billion endowment to fight diseases like AIDS and malaria, start a green revolution in Africa, improve American high schools and provide Internet access at libraries throughout the world. The foundation, which now has about 543 employees, currently rents office space in four separate buildings.

The Associated Press and Journal staff contributed to this report.