By ROB CARSON
The News Tribune 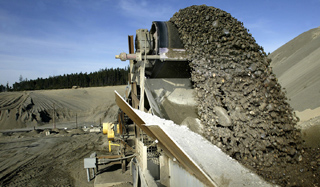 AP Photo/The News Tribune, Dean J. Koepfler [enlarge]
Conveyor belts are used to process gravel at the Glacier Northwest Gravel mine plant in Dupont. The 387-acre mining operation is tucked away out of view of most Dupont residents but a proposed 177-acre expansion has them up in arms.

TACOMA — Check out the people smiling biggest over the federal economic stimulus package, and chances are you'll find Bruce Chattin among them.