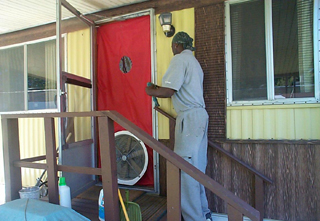 Photo courtesy of KCHA [enlarge]
Crews use a blower door to measure air leakage from a home.

Stephen Norman, executive director of the King County Housing Authority, said his agency is getting about $20 million from the stimulus package. About $12 million of that will go towards weatherization of homes and multifamily buildings, and $7.5 million will go toward the backlog of repairs like replacing a building envelope or elevators.

“We have almost 3,000 units of public housing that have been starved for repair money,” Norman said.

KCHA will also apply for competitive funds from the U.S. Department of Housing and Urban Development. It has identified projects valued at $28 million that could be done quickly. Norman said it is unclear which projects will be funded from the $7.5 million repair fund and which ones could be funded competitively. The decision will be based on HUD criteria, which has yet to be released.

KCHA is hiring architects and engineers, and entering into the contracting and permitting process to speed up its work.

“These are all critical projects so even if we don't fund them through the stimulus this time around... we know that all of the projects that we currently have in design, we will need to do one way or another,” Norman said.

KCHA is ramping up weatherization now. The organization, which already has the largest weatherization program in the state, is typically allotted an annual amount of money for that work. Because KCHA will be receiving more money from the stimulus, it is spending the money it already has now.

KCHA's Home Repair and Weatherization program generally weatherizes up to 1,000 owner-occupied and rental housing units per year. Stimulus funds will allow more than 3,000 units to be weatherized, and perhaps as many as 4,000.

KCHA will be issuing bids for a broad set of subcontracting work, from duct work to insulation. Bids will be issued on an ongoing basis in the Daily Journal of Commerce.

One KCHA contractor has already ramped up in anticipation. Michael Kim, managing partner of electrical contractor Advanced Energy Management of Federal Way, went from seven employees in December to 30 employees today because of the stimulus funds. In December, AEM won a KCHA contract for $900,000 that called for him to do projects on a case-by-case basis over two years. Now, thanks to the stimulus funding, KCHA speeded up the schedule and Kim says he's on pace to do about 400 units a month. “It's a fantastic thing.”

Kim says the stimulus is already working, bringing business to small construction companies like his. But it's also working because all of the new employees he has hired since December had been collecting unemployment.

“The whole purpose of the stimulus package is to get people working,” he said. “The stimulus money is actually getting to the people that need it.”

One of Kim's employees is a father of six young children who had previously owned his own general contracting business that concentrated on housing. When housing dried, up so did his work. Now he works at AEM.

The average pay, Kim said, is $30 an hour. When he posts jobs on Craigslist, Kim says his phone rings constantly for three days. “There's a lot of folks out there that are hurting.”

KCHA is also trying to figure out how it will weatherize units. It could do easy items like swapping out refrigerators and light bulbs on many units, or it could do higher level work on fewer units, like infrared and blower-door testing. Norman said the agency is trying to figure out what creates the biggest bang for its bucks in saving energy and creating jobs.

“Like much of the infrastructure in this country (public housing) was literally rotting away for lack of attention,” he said. “What we'll come out of this with is a housing infrastructure in the region that's been both re-enabled and improved to operate more cost efficiently.”