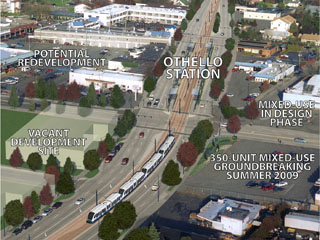 Images courtesy of Sound Transit [enlarge]
Four development sites surround Othello Station, including one where construction is expected to start next month.

WHEN SOUND TRANSIT Light Link Rail makes its debut this July outside of downtown Seattle, not a single significant new private development will be there to greet it. Transit-oriented development (TOD) is widely recognized to be an ideal land-use pattern for achieving sustainable growth. But while our “T” is finally arriving, so far the “D” is a no-show. What happened, and what might the future hold for development?

TOD has an unparalleled potential to address a host of major societal shifts reshaping the U.S. Changing demographics and consumer preferences, increasing awareness of the negative impacts of sprawl, the rising cost of oil, and the need to combat climate change are all working in concert to drive demand for more compact housing in walkable, mixed-use neighborhoods with access to high-quality transit.

Transportation produces nearly half of the Puget Sound region's greenhouse gas emissions, and last spring the state passed legislation mandating a 50 percent reduction in vehicle miles traveled by the year 2050. TOD has been shown to significantly reduce VMTs by providing desirable alternatives to cars, and thus is an essential strategy for meeting the mandate.

Over recent decades, investment in TOD in the Seattle-area has lagged behind other regions in the U.S. But the new light-rail investment, along with heightening awareness of the connections between land-use and environmental impact, have set the stage for a new wave of outstanding TOD opportunities. 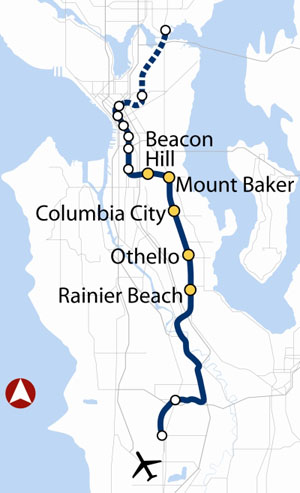 Five light-rail stations are being built in Southeast Seattle.

The Sound Transit light-rail line includes five stations in Southeast Seattle that are surrounded by low-intensity development and underutilized land. Compared to the city as a whole, Southeast Seattle has greater racial diversity, a higher population of immigrants, larger-sized families, and lower incomes and housing prices.

Redevelopment in the Southeast Seattle station areas is key to realizing the full potential of the light-rail system, but existing code, neighborhood resistance to change, concerns about gentrification, and economic barriers to redevelopment all pose significant challenges.

From 1998 to 2001, the city conducted a station area planning process that included the five Southeast Seattle stations, and modest upzones were enacted. The city is in the process of updating neighborhood plans that include the Beacon Hill, Mount Baker and Othello station areas.

Since the new light-rail line was approved in 1996, the only two major developments in Southeast Seattle have both been Seattle Housing Authority public housing projects: Rainier Vista at Columbia City Station and NewHolly at Othello Station.

Remarkably, not a single significant private development has yet broken ground in any of the five station areas. Over the past several years there have been a substantial number of proposals — more than 1,500 housing units within a 10-minute walk of a station by one estimate — but current economic conditions have delayed all but one of these projects.

The first privately funded TOD project set to go forward in Southeast Seattle is a 350-unit mixed-used building at Othello Station, scheduled to break ground in June. Mike Hlastala of Othello Partners, the firm developing the project, said the key factors that made it feasible were: The availability of a large development parcel at a prominent intersection; a city park adjacent to the site; streetscape improvements along the light-rail corridor; a new bike trail connecting to other neighborhoods; a nearby city library; and Seattle's affordable-housing tax abatement.

Given that Seattle just went through a major development boom, the lack of new private development in the Southeast Seattle station areas is a blatant reminder of market reality: The future value of the light-rail amenity has not been sufficient to make up for the lower real estate prices in Southeast Seattle neighborhoods, and so other neighborhoods have been more attractive to private developers.

When the real estate market turns around, the light-rail station areas can be expected to heat up. But since competition from more-established neighborhoods is not about to go away, getting high-quality TOD on the ground sooner than later will necessitate public-sector support. The time to get new policies in place is now so that opportunities are not lost during the next development cycle.

Policy strategies for enabling the successful implementation of TOD in the Southeast Seattle station areas include:

• Upzones. All five station areas have large swaths of land zoned for single-family and low-rise. In mid-rise zones, the maximum building height is 40 feet in two of the station areas, and 65 feet in the other three.

• Developer incentives. Programs should be specific to station areas; examples include tax abatements, density bonuses, fast-track permitting, parking reductions and even density minimums. Unfortunately, the tax-increment financing that has made TOD projects feasible in other states is not available in Washington.

• Enhancing the public realm. The level of investment required to create a desirable public realm — made up of the streetscapes and open spaces between the buildings — is typically beyond the capacity of private development, in which case local government can share the burden.

• Site assembly. Fragmented parcel ownership makes it difficult to assemble suitably large TOD sites. Sound Transit collaborated with the city to establish a community development fund for Southeast Seattle that offers site assembly loans, but so far this has failed to catalyze TOD.

Of the five Southeast Seattle stations, Othello has the most near-term TOD opportunities. Othello Partners has a second mixed-use residential project in the design phase, located adjacent to its first. Seattle Housing Authority is in negotiations with Opus Northwest to sell a large vacant site at the south edge of the station. Just across the street, Safeway was until recently negotiating the sale of its store site for redevelopment.

At Columbia City Station, Seattle Housing Authority is selling off two prime corner parcels for private development, although the 40-foot building height limit will likely be a challenge to feasibility. One block east of the station, options are being explored for the 9-acre Zion Preparatory School site, but upzones would be a prerequisite. Farther afield on Rainier Avenue South, three mixed-use residential projects in the design phase are on hold.

Mount Baker is the most urbanized of all five station areas, and offers perhaps the greatest promise for future TOD. Several large sites — including Lowe's, QFC and the University of Washington Laundry — have great potential for redevelopment, but so far nothing has moved past the very early exploration stages.

For both the Beacon Hill and Rainier Beach station areas, opportunities for TOD are severely constrained by zoning, as well as by the existing low-density context. At Rainier Beach, all that has been proposed so far is a 66-unit townhome project. At Beacon Hill, there have been no publicly discussed plans for TOD-scale private redevelopment.

Sound Transit owns miscellaneous properties in all of the station areas that offer prospects for private development, but as of yet, no deals have been struck.

The desire to foster high-quality TOD in a timely manner calls for visionary thinking. Recognizing this need, nonprofit Futurewise and design firm GGLO have partnered to produce a “Blueprint for Transit Oriented Communities.” Available free this fall, the blueprint will provide a bold visualization of TOD's potential, along with policy recommendations applicable to Seattle and cities statewide.

Dan Bertolet is an urban designer at the Seattle-based integrated design firm of GGLO.