Image courtesy of ARC Architects [enlarge]
Some of the townhouses will get pitched roofs.

The project will replace vinyl siding, roofs and windows on the 31-building complex, which was built in 1968. Apartments will get new doors and fluorescent exterior lights with daylight sensors.

Exterior improvements will include new textured surfaces in place of the vinyl siding and construction of gables above a third of the apartment entries to create a village-like look. KCHA will also add insulation in the attics and provide new seven trash/recycling enclosures.

Six of the townhouses will have their flat roofs replaced with pitched roofs. Four conventional apartments will be converted into ADA-compatible units, with modifications made to bathrooms, kitchens and living areas.

KCHA says the building envelopes are energy inefficient, and cause moisture and mold problems. The improvements are expected to reduce energy costs by 13 percent for the residents. 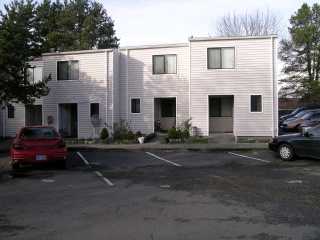 Work is set to be completed by December.

W.G. Clark Construction Co. is the general contractor for the building envelope improvements. ARC Architects is the designer.

SKHS Architects will design and Rafn Co. will oversee the ADA unit conversions, which are set to begin in July.

The Obama administration has dedicated $4 billion to preserve and improve the country's public housing stock.