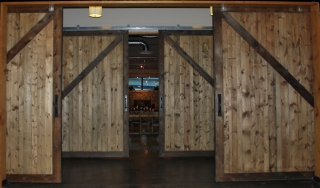 Peter Sing, president of Sing Homes, sees himself more as an inventor than a builder or manufacturer.

Early in his career the Taiwan native worked in the aviation industry, where he became familiar with the light-but-strong honeycomb-structured materials used in aircraft and other applications. He saw possibilities in creating a similarly structured material that was strong but cheaper and more environmentally responsible than aluminum, a common component in such materials.

Sing, who said he holds more than 30 U.S. patents, developed a wood composite in 2006 he calls Sing honeycomb panels, which use wood fiber integrated into vertically structured foam and arranged in geometric shapes. The result is a strong, stiff, lightweight material that can be cut and sanded like regular wood.

It can be produced to specific widths and lengths, and manufactured as panels, beams or posts, and adapted to other structures.

Sing has a small office and manufacturing facility in McCleary, 20 miles west of Olympia, where he produces dozens of different products including doors, furniture, flooring and building materials — all using his lightweight material. He also sells a log home-building system he started in 1992 that now uses his composite product.

“This material is revolutionary,” Sing said with cheerful zeal, adding that products made with it should last a hundred years.

Durability is an important selling point for Sing, who sees the honeycomb material as a sustainable alternative to other building materials. The furniture industry in particular, he said, encourages people to buy cheaply built items that they can discard after a few years when the items break or as fashion dictates.

Sing's composite, he said, is low cost, made of renewable or recycled materials and requires little energy to produce. And because of its light weight, it is cheaper to ship than other materials.

The cabinets, shelves and dressers on the company's website are simply designed and moderately priced, intended for the long haul. A five-drawer cedar-veneer bedroom dresser, for example, sells for $510, and a butcher block table top starts at $10 a square foot.

Clients are generally homeowners, architects, designers and small custom door manufacturers. But others see uses for the material too. A truck manufacturer inquired about using Sing's panels for the bunk seats in its cabs, and another company wanted to use the panels as a platform for cars in a museum.

Sing estimated that 90 percent of his customers are from out of state.

Urban Enoteca, a wine-tasting room in Seattle's Sodo neighborhood, commissioned two pairs of large sliding doors to furnish its space. Linda Capps, a sales assistant at Sing, said solid wood doors would have been much heavier and face problems with warping and cupping, making them difficult to slide open.

Sing wouldn't say much about his facilities or manufacturing process, citing trade secrets. Company literature describes the material as vertical grain veneer strips that are taken and criss-crossed in a pattern similar to a checkerboard, then supported in foam to offer insulation.

The shape and composition lends the material its stiffness and strength, like rebar in concrete, he said.

The resulting planks are 10 percent wood veneer and 90 percent foam, which accounts for their light weight. They're finished by attaching skins to both sides and the edges using urethane glue. Planks can accommodate any kind of outer skin, though the company draws the line at particle board, which it considers less durable than other options.

Sing said his materials costs are minimal, and his products could eventually cost less to produce than lumber or particle board. But that will depend on whether he can scale up production and improve his facilities.

Sing said he is looking for investors to help him ramp up.

In the end, Sing said he “not looking to instantly get rich,” but rather kick start “a revolution of the American lifestyle” that emphasizes high-quality sustainable materials over destructive consumer culture.

If everyone bought furniture that was built to last, he said, “other furniture manufacturers will go out of business — at least those with a conscience.”