Townhomes reappear with an urban feel 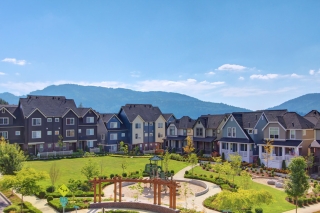 The housing market in the Puget Sound area perked up, logging a 21 percent jump in home sales in March, according to the Northwest Multiple Listing Service.

“The townhomes appeared like magic,” Hurme said. “And many more are in the pipeline.”

Critical to a successful townhome project is an urbanized setting and close proximity to transportation and shopping, Hurme said. Several recent projects are in Issaquah Highlands and Newcastle. Intracorp, CamWest Development (a Toll Brothers company) and Pulte Homes are just a few of the developers involved in the local townhome market. Newer units come with high-end finishes such as stainless steel appliances and granite countertops.

“We have seen a demand for homes and communities that are in close proximity to major job sites and have a sense of a close-knit neighborhood and community,” said Brian Bullock, vice president of sales for Pulte Northwest Division. “Buyers are generally upwardly mobile young couples or families and affluent empty nesters,” said Bullock.

Sunset Walk by Pulte Homes is in Newcastle. The units run between 1,400 and 2,000 square feet. The project is adjacent to parks, trails and shops and has easy freeway access. 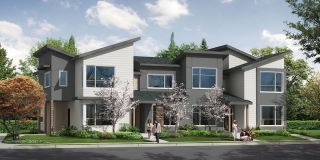 Image courtesy of Weber Thompson [enlarge]
Allegro at Columbia City, designed by Weber Thompson, has a rapid-transit station across the street.

“Lake Boren isn't even completely open yet and it has already had four sales,” Hurme said.

BDR Homes' Allegro at Columbia City, a 41-townhome project at Rainier Vista in the Rainier Valley, also demonstrates the advantage of easy access to transportation in an urban setting. The first of 10 buildings isn't set for completion until late June and all but one unit in that building are sold, according to Hurme.

“One of the main selling points there is that there is a rapid transit station across the street,” he said.

Even though townhomes are gaining in popularity, they aren't a replacement for single-family homes, Hurme said. “People still want their piece of the American Dream, so single-family houses, if they go head-to-head against townhomes, always win,” he said.

A show of confidence in the Seattle housing market occurred in November when Toll Brothers, a homebuilder with offices in 20 states, bought CamWest LLC. The purchase price, which was not disclosed, was paid in cash. The assets acquired by Toll Brothers included about 1,300 lots.

Eric Campbell, CamWest president, was not available for comment.

NWMLS statistics show that brokers added 8,170 new listings last month — nearly 1,000 fewer than the number of pending sales, and about 1,100 fewer new listings than the same month a year ago. With those additions, the number of active listings at month end totaled 24,883 across the 21 counties in the Northwest MLS service area. Compared to a year ago, inventory is down 25.6 percent.