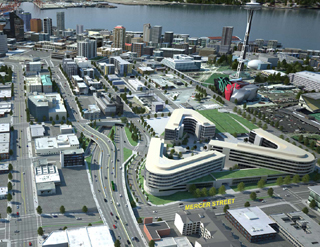 Federal officials said yesterday that Seattle is getting a $14 million grant for Mercer West, clearing the way to start building the $98 million project that is expect to create 1,000 jobs.

Work will begin early next year and wrap up by mid-2015, city officials said. Construction bids will go out in early autumn.

The estimated cost of construction is $81.4 million.

Located between Dexter and Elliott Avenue West, Mercer West is the second phase of the Mercer Corridor project. The first phase, Mercer East, is under construction and scheduled to be done in 2013.

The Mercer Corridor will be a continuous two-way arterial from Interstate 5 to Elliott Avenue West. It also will help connect two other major projects: the deep-bore tunnel that will replace the Alaskan Way Viaduct and the new state Route 520.

City officials have worked for decades to unclog the corridor that locals call the “Mercer Mess.” Completing both phases of the project is estimated to reduce the travel time from I-5 to Elliott Avenue West from 38 to 10 minutes during the evening rush hour.

Around 70,000 vehicles a day travel through the corridor, which serves South Lake Union, Port of Seattle terminals and Seattle Center. City officials expect the number of jobs in this corridor will increase from 43,400 today to 81,700 in 2020. The number of households in the Mercer West service area is expected to increase by 18,000 by 2024, city officials say.

• Widening Mercer Street between Fifth and Ninth avenues north, and replacing the state Route 99 bridge over Mercer Street. This will provide three lanes in each direction as well as wider sidewalks and a bike path.

• Between Fifth and Queen Anne avenues north, Mercer will be converted to a two-way street with two lanes in each direction and turn pockets.

• Turning Roy Street between Fifth and Queen Anne avenues north into to a two-way street with bicycle lanes.

City officials say completing Mercer West is critical to the success of the state Route 99 tunnel. The north end of the tunnel will be just south of Mercer Street, which as a two-way corridor will be a primary route for motorists traveling to the tunnel.

The federal money is a TIGER Grant. This is the second Transportation Investment Generating Economic Recovery Grant the city has received. Federal officials previously awarded the city $30 million for the Mercer East project.