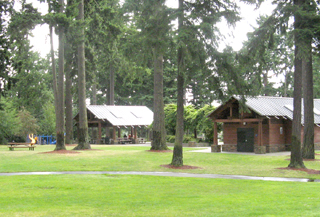 Photo by MacLeod Reckord [enlarge]
New picnic shelters at Angle Lake Park will look like the craftsman-style buildings there today.

Not every project takes 16 years to finish, just Kit Ledbetter's.

Ledbetter is parks and recreation director for the city of SeaTac, and has been working since 1997 to make Angle Lake Park into something special for area residents.

“I have three years before I retire, so I'm so happy to do this project,” he said.

The master plan for the 10-acre park off International Boulevard, one mile south of the airport, was developed in 1997 and the first phase of improvements was finished a year later. The $1.5 million final phase of the master plan is finally ready to go, with the city advertising for a general contractor on Wednesday.

“With its beautiful 1930's (Works Progress Administration) design theme, craftsman woodwork structures and scenic lake views of Mount Rainier, this park has truly become the jewel of the city of SeaTac's park system,” said Ledbetter in a release. “We couldn't be more excited for this final phase of construction, and thanks to an outstanding design team, our community will continue to enjoy Angle Lake for years to come. We just need an outstanding contractor team to finish the puzzle.”

The city will open construction bids Jan. 29 for improvements to 3.5 acres of the park, including the addition of a water spray park as the focal piece.

Ledbetter said he visited about 20 regional spray parks to get ideas, and as a result he said the Angle Lake spray park will have more water — 300 gallons per minute — than any other in the area. It also will have a “mega-soaker,” which is a 55-gallon drum that dumps water on not-so-unsuspecting kids below.

Image courtesy of Waterplay Solutions [enlarge]
A spray park for kids will be part of the last phase.

Waterplay Solutions is working with the city on the spray park.

“It is very gratifying to see a 16-year-old master plan come to fruition,” said MacLeod Reckord principal Ed MacLeod in the release. “This second phase of improvements will better accommodate the heavy use that this popular park enjoys, while providing an exciting new water play area located in the underutilized west lawn.”

Work on phase two is expected to start next month and finish by the end of June, in time for the city's annual International Festival.

Ledbetter said the park dates back to the 1930s, when it had a dance hall and giant waterslide that flowed into the lake. It was run by King County until SeaTac became a city in 1990 and took over.

Ledbetter said another $500,000 will be needed for future work involving upgrades to the lifeguard building, boat dock and fishing pier.

He hopes that won't take another 16 years.