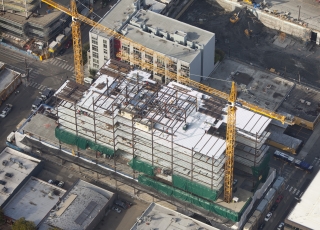 Chris Heger has jobsite efficiency down to a science. For Heger, there's no detail too small to overlook.

As Turner Construction's project manager on the 306,000-square-foot Block 45 project for Vulcan in South Lake Union, Heger monitors the most cutting-edge systems for saving money and time.

Like a high-tech orchestra conductor, he measures what he calls the “cadence and tempo” of nearly every move that his workers and machinery must make in an effort to squeeze the greatest amount of efficiency he can.

“As the general contractor, I try to think about what I can do to make the entire job more efficient,” Heger said.

Even the most basic actions that his crews take can be analyzed to close gaps that interfere with productivity. His thirst for efficiency extends to quenching workers' thirsts for fluids.

“All jobsites have water jugs,” Heger said. “On this jobsite, I supply everybody with bottled water, which they carry in their tool bags.”

When he did the math, Heger realized that workers drink about every 10 minutes, or six times each hour. Walking to a water jug, at a rate of 240 feet a minute, he said, adds unnecessary trips for workers.

“Everybody at a jobsite has to eat, drink water and go to the bathroom,” he said. “I can make that more efficient. I'm trying to reduce any wasted motions.” 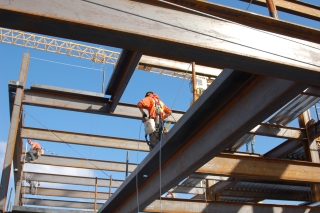 Heger said he studies the movements of construction workers in the same way that a doctor or scientist analyzes the movements of skilled athletes — studying slow motion films to find the perfect stride or stroke for the optimal results.

Heger said he also analyzes the movements of on-site machines to find the greatest productivity.

Two cranes better than one

At the Block 45 site, which began construction in January and will be complete in summer 2015, Turner Construction has employed a two-crane system that Heger said doubles the efficiency at the site.

Two cranes allow Turner to complete one floor of the building every two days. That's twice the conventional rate, according to Heger.

The cranes work simultaneously in two zones defined by each crane's radius. Each zone has specific subzones, and neither crane ever interferes with the other.

Prior to construction, the cranes' expected movements are “put into a massive Excel spreadsheet” that ensures neither of the crane booms ever touch or ever overlap in the same zone, Heger said.

“They are never working in the same area at the same time,” he said. “It was very detailed planning, set to the cadence and tempo we're working at.”

The two-crane system also ensures that workers stay within the eight-hour work day, rather than going overtime, past 3:30 p.m., and earning time-and-a-half.

The most minute variables are factored into construction planning, he said. For example, before being delivered to the jobsite each steel beam is marked at its center point — saving time at the jobsite that typically would be needed to measure and mark the beams for their center of gravity before hoisting.

Heger said he even reduced the number of different-sized bolts for the beams to save workers time in figuring out which bolts to use.

“We try to take out all the variables possible,” he said. “I have to maximize every step in the process and reduce any wasted motions. Why waste guys' time measuring stuff and calculating on-site, when it can be done somewhere else?”

Heger compared his super-efficiency model with football coach Chip Kelly's “hurry-up offense,” which Kelly used effectively with the University of Oregon Ducks and now as coach of the Philadelphia Eagles. Kelly's offensive system is designed to keep opponents off-balance by quickly running plays before the defense can get ready.

While Heger said there are no “opponents” on a construction site, the general contractor is always in a race against time.

In addition to studying the modern hurry-up football offense, Heger said he looked back more than 100 years to the innovative studies that Frank Gilbreth did to find efficiencies in industrial productivity.

Gilbreth studied the actions of bricklayers and found ways to save time and energy, setting the stage for what Heger called a “productivity revolution” in the early 1900s pioneered by people such as Henry Ford and his assembly line process.

“He looked at human movement and human productivity,” Heger said.

Heger employed those lessons to find ways that cranes at the Block 45 site can deliver materials to the exact spot where workers will need them.

“You don't want to land (off-load) materials and then have your workers push the materials around to a different place,” he said. “Our subcontractors can tell us exactly where they want us to place materials.”

By studying supply chain management, Heger also found efficiencies. Working with Western Partitions of Tigard, Oregon, Hager requested that the company weather-proof exterior panels for the Vulcan building at the Oregon factory. That means less work and less space needed at the jobsite.

“We do as much work off-site as possible and that removes one more variable — the weather,” he said, explaining that Block 45 crews won't need to weather-proof the panels outside when they arrive at the jobsite.

Every jobsite is different, and Heger said some of his methods — such as the two-crane system — won't work if a project is below a certain size. But, he said, the dual-crane system worked for Turner several years ago when it constructed the Nintendo of America Redmond building.

He said the Block 45 building, with 43,000-square-foot floor plates, is at the lower limit of where a two-crane system will work.

But other time-saving techniques — such as pre-measuring the steel beams' center of gravity for quicker hoisting and providing bottled water for crews — can be used on nearly any jobsite.

Heger, who has been with Turner for 10 years and previously worked with Skanska and Sellen Construction, said his overall goal is to reduce the chances of losing time and money at a jobsite.

“In construction, a lot of times what you're doing is managing risk,” he said. “We're at a neat precipice in history, with faster computers and what I consider a data revolution.”