By MEGAN CAMPBELL
The News-Review 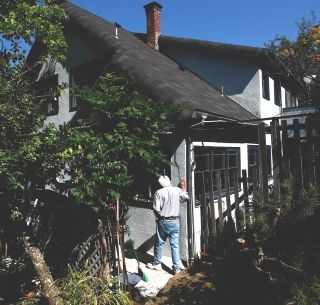 AP Photo/The News-Review, Michael Sullivan [enlarge]
Redge Ranyard is also restoring landscaping that was neglected when he rented out the house prior to moving back in.

ROSEBURG, Ore. — Retired university professor Redge Ranyard stuck out his tongue at his wife, Janet, in the kitchen of their historic home on Cass Avenue in Roseburg on a recent Wednesday.

Redge Ranyard, 91, had begun describing the work he did to replace the countertops when his 93-year-old wife spoke up.

“You make it sound like I just sat around on my backside,” she said.

The Ranyards, married 67 years this November, have been occupied for the past year or so by a joint project. They spend most of their mornings in their yard, restoring it to what it was before they rented out the house almost five years ago.

The couple first purchased the modified English cottage in the summer of 1990.

In 1989, after Redge Ranyard retired, the couple moved to Mexico for about a year. Before that, the Ranyards had lived in several locations, including California, Illinois, Washington and New Zealand — not necessarily in that order. They had four children along the way.

On their daughter's recommendation, they decided to explore Roseburg while driving up from Mexico.

They had been camping at River Forks Park west of Roseburg, where the South and North Umpqua rivers meet, while searching for a historic house to settle in.

Finally, the couple's real estate agent showed them the three-story home, which was built in 1925.

“The Realtor took us over and opened the door, and we looked at each other and said, “Uh-huh. This is it,” said Janet Ranyard, a retired occupational therapist.

The Ranyards say they are the third owners of the 2,600-square-foot house. The first, they said, was a Dr. Wainscott, who practiced medicine in the area around the early 1900s.

The Ranyards said they learned Wainscott would travel to house calls on his horse-drawn buggy. Wainscott parked his buggy in the garage, but Redge Ranyard has no idea where he kept the horse.

The couple love historic homes, but this house “came with a ton of problems,” Redge Ranyard said.

He committed his time to restoring window frames, removing the “intense” red carpet, renovating the kitchen or installing the upstairs bathroom.

In 2009 the Ranyards decided to put their house on the market and move to Springfield.

They sold it for $112,000 less than they hoped to get. The buyer defaulted after one payment.

The house was returned to their ownership, and they decided to put it up for rent.

Over the course of four years, the house was damaged and the lawn was destroyed.

“Leave a house alone, my dear, with people who don't care for it, (and) it overgrows outside — the main thing is our lawns died,” Janet Ranyard said.

They said the tenants let the ivy run rampant, the boxwood hedges lost their shape and the grass died, along with Janet Ranyard's roses.

“The yard had gone to hell in a handbasket,” her husband said.

He said the renters put nails in the walls instead of making use of the hooks hanging from crown molding.

A year ago, the couple moved back and began working to restore it to the condition in which they had left it.

Redge Ranyard said he is up and working at 7 a.m., with Janet following shortly after.

“By noon you find us kind of drooping,” Janet Ranyard said. “We lie down and nap in the afternoon.”

They get occasional help with some of the heavier lifting.

One of their main projects is removing the thriving ivy. Janet Ranyard said they've pulled enough ivy so far to fill four truckloads.

“We still have ivy, but it's getting to the point where we can see something else,” she said.

While the couple might move more slowly than they once did, Janet Ranyard said keeping active contributes to their ongoing good health.

“If we ever manage to get our stuff together, this place will look a lot neater,” Janet Ranyard said.